‘Being in a band is a privilege - I don’t ever want to take that for granted again.’ – Interview with Steve Rawles of Belvedere

Belvedere is a term that could refer to either a beautiful sight, a brand of vodka, or the Canadian punk rock band founded in the late 1990s. This last one, with their fast riffs and melodic vocals, made their comeback in 2011 after breaking up in 2005, releasing their latest album ‘The Revenge of The Fifth’ in April of this year. Snoozecontrol met up with singer and guitarist Steve Rawles at Jera On Air 2016 to talk music, touring, politics, and family.

Fans had been waiting for a new album since the reunion, but you took your time writing and recording ‘The Revenge of The Fifth’. It is the first album since ‘Fast Forward Eats the Tape’ (2004), recorded in a time when the band would release an album every 1-2 years.

With this album, we had no timeline. We used to be a band that had to go towards timelines: hit the touring cycle, record the album, go go go go! Now, we did have the time to just jam it out. We needed to take the better part of two years to write because we could only practice once every couple of weeks, for two hours at the time. What it did for us though, is it made us really reflect on what we were writing. We tried to make it as good as possible, as opposed to just rushing songs out like we used to - ‘those first 15 songs are good, put ‘em down!’ As our drummer owns a studio, we could take the better part of two months part time to record it, take it home, listen to it and reflect: is this what I really want to have on the album? In the end, it was a really positive experience. We had no fighting in those two months, which is really hard for any band in that situation. Writing and recording is stressful. We just said to each other: ‘we want to put out the best record possible. No hard feelings, no matter what.’ That’s what we did.

At the time of putting the band on hold, did you consider the possibility of one day, maybe, picking it back up again?

No, definitely not. We weren’t taking a hiatus,  we were done! We'd had enough of each other: we spent the better part of 10 years in a van together, and we simply didn’t like the people that we were at the time, we were just kids still. I think we all wanted a lot of the same things, but we weren’t communicating very well. And so when I started this band ‘This is a Standoff’ I toured for a lot of years afterwards, and that was a much more positive experience. But at the end of the day I really love playing in Belvedere. And so somewhere around the end of 2011 we started talking to each other again, and started realising we were older guys, we didn’t care so much for the stupid stuff that we did when we were young. That we really did love hanging out with each other and playing in a band together. Now, I consider the guys to be among my best friends. It’s so great, to so many years later still be able to do this. It’s all much more positive. To appreciate that small group of people around us, we’re very lucky to have that. 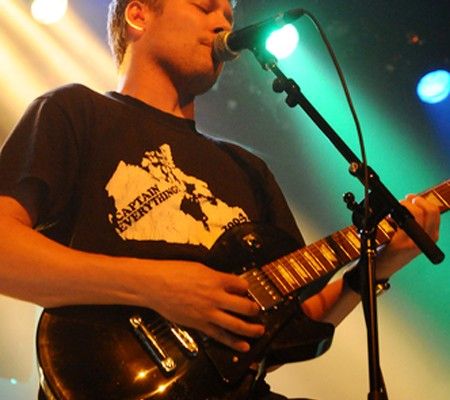 You’re not officially a full time touring band anymore – how is that working out for you?

For a long time, we were on tour 250 days a year. It was a full time job, although I never called it a job because it was such a fun experience. And for being a little band from Calgary that was able to tour the world.. Never take that for granted, you know. I put a lot of work into booking these shows and establishing these relationships, and I still sometimes pinch myself. We tour, we play shows with NOFX, with Pennywise, and it means a lot to me to still be able to do that. Even as I’m about to be 40, it still means a lot to me.

Are you ever afraid people come to Belvedere shows out of nostalgia?

No, nostalgia is great! Nostalgia is never a bad thing. Maybe that’s part of the reason why we wanted to make that new record: we wanted to still be relevant as a band, we wanted to put out something that we felt was the best stuff we’d ever done, instead of just riding these old songs that we’ve known for twenty years. At the same time, I know what it’s like to like a band when I was younger, and to still love those old songs.I appreciate so much that people do have that nostalgia factor to it. I just think it’s wonderful because it’s so great for us to be able to come over here and now, instead of talking about which beer we like, we talk about our kids. We’re just pulling out phones (back in the day, we never had phones), and we’re showing each other pictures of our families, and it’s great. 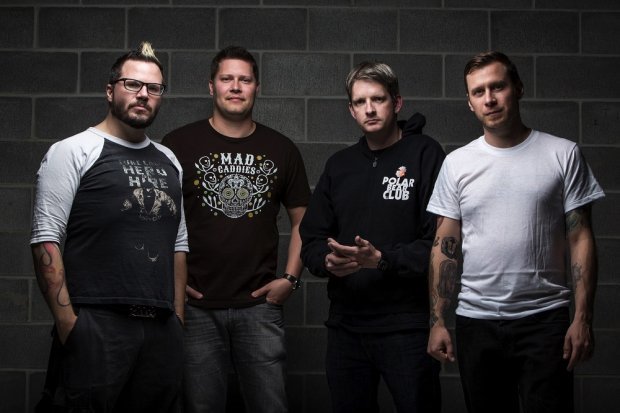 Belvedere have always been a band with a political stance. On ‘The Revenge of The Fifth’, you talk about how the world is slowly deteriorating. What has specifically gotten you worried lately?

There’s small developments, like the Brexit, the US elections. But you know, I don’t know. This is just my opinion of course: I’m sad to see that the UK decided to leave, but I assume that they’ll work things out. I hope they are able to make their agreements with all these other countries and make it so it’s still loveable for its inhabitants, and still possible for visitors to come to the UK, because I love playing there. With regards to the US elections: both sides, both parties, they all essentially feed the same masters. I don’t know if Hilary Clinton’s much worse than Donald Trump. I wouldn’t like Donald Trump at a Martini party, let alone as president. I don’t know if I’m more Hilary Clinton, I’m not either. I’m a little sad Bernie Sanders didn’t make a splash, as big a splash as I would’ve liked.

But at the end of the day I like to think a little bigger, globally, and ultimately I always want to make sure that people are taking care of their families. To me that’s the most important thing. There’s always going to be assholes that are running our countries. And you know – what can you do? Except try to voice your opinion, if you live in a country that’s fortunate enough to have a democratic process., but you ultimately just need to watch out for each other, watch out for your friends. Spread a little love out there, because the world needs  a lot more of that, and try to pay attention to what you throw into the garbage.

Humans have been around for a long time, and we’ve been fucking this planet up since we started. I think in terms of just like, be a good person, make a good mark on the planet, and so on. You can’t really get down about all the bad things in the world. I’m not a religious person and I believe we only have one shot at this. If all you do is sit around and worry about it, that’s not a good way to live. Try to be positive and influence the world in a good way.

I feel fortunate. I have a lot of great friends and a lot of people that I keep in touch with and I hope the best for them, and that’s all you can really do: is be positive. What else can you do?

So what’s in store for the future?

Mostly in the touring department, I want to keep going to places. We want to come back for more shows in Europe, we want to return to Japan, we still have to go back to the UK, Italy and Spain. But we just can’t do this all in one big go. We have to take it four, five days at the time. Just like, over weekends: leave on a Wednesday, come back on a Sunday. It’s the best opportunity for us to do that. It’s like a holiday. I am on holiday! Ultimately, being in a band is a privilege. Being able to tour these places is a privilege. And I don’t ever want to take that for granted again.