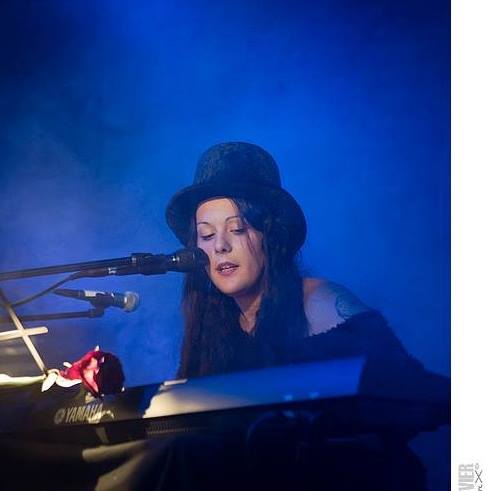 One of the nice surprises at Trolls et Légendes will be the local heroin called Hano-ah, we already reviewed her EP and adored it. Time for a short presentation, before the final act on stage!

Can we start with explaining the meaning or the philosophy behind your name?

The name of my project Hano-ah has no real signification, but for me it’s more like my own musical flying saucer: a special one that sounds like oneiric and melancholic.

How do you describe your music?

A Capella music, with a mix of oneiric loopd and beat box with a floating sound...

What made you decide to start making your own music (in 2010)?

I started this project as a teenager as I wanted to express myself. I had the chance – in 2010 – to launch my own album by the bias of the community label Akamusic. I also had the chance to meet Renaud lhoest, arranger of the strings on the album. This collaboration felt right, enriched my point of view and touched me deeply. Sadly Renaud left us after a battle against his sickness. He left us too soon. After that I had to reshape my project and managed to produce my second solo album in 2013.

What are the lyrics about (mostly)?

Universal subjects: sensitive things that touch me, things that touches humanity ... For sure subjects that are important in everyone’s life: love, passion, death, mourning, melancholia, afraid of being left alone …

You are from Mons and will play for the first time at the legendary Trolls et Légendes, how do you feel about it and how did it happen?

I am very happy that I can perform in my own city and for sure during a festival that I love and appreciate so much. I think it will be a great fusion between my music and the whole vibe of the festival. I reckon there is something fantastic, something strange in my music, something beyond reality, something that opens mystical portals. See my music as a long walk inside yourself, as walking into an internal magical forest; this is how I see it happening.

Have you been there before and if yes on what did you focus?

Yes, I have been there and have been going there for years, as I see a lot of artists that I like and whom I love to watch. I must say that this festival offers something special, something that you don’t find anywhere else and it’s a great thing for Wallonia to have it on board! The quality and the innovative part enrich us all!

Your first album was signed by Akamusic with Universal distribution, how did that happen?

It’s a production from the communion and via the site Akamusic. The distribution was done by the Universal label via 235 co-producers. This helped me in a way that I could get access to a television set and show my album, get my album in the shops and be played on the radios. It was a great time and launched me. I’m really thankfull for it. My second Ep although was an auto-production in 2013.

More recently you presented us a new EP Slow Waltz made with human beatbox and hypnotic mood, it sounds very fragile, and how did you come up with the idea?

Well, as Renaud left us too soon, I had to reshape my project in order to be able to go on. I realized I could play certain themes of different instruments on my own and managed to explore new sounds and new ways of creating music. I bought myself a loop station and started creating vocal soundscapes, whilst still keeping the piano as my main instrument.

What can we expect on stage? Will it be just you and a piano/synth?

Yes, as it’s my solo project! It will be just me, in all intimacy: me, my voice, my loop station, oneiric vocal loops and my piano!

Why the hat on stage?

It’s a little wink into the direction of the steam-punk spirit. It also has an out of time touch and goes well with my Unclassifiable musical project!

I hope to get a few week off in a nice and peaceful area to work on some new material as I hope to deliver a new LP in 2017!