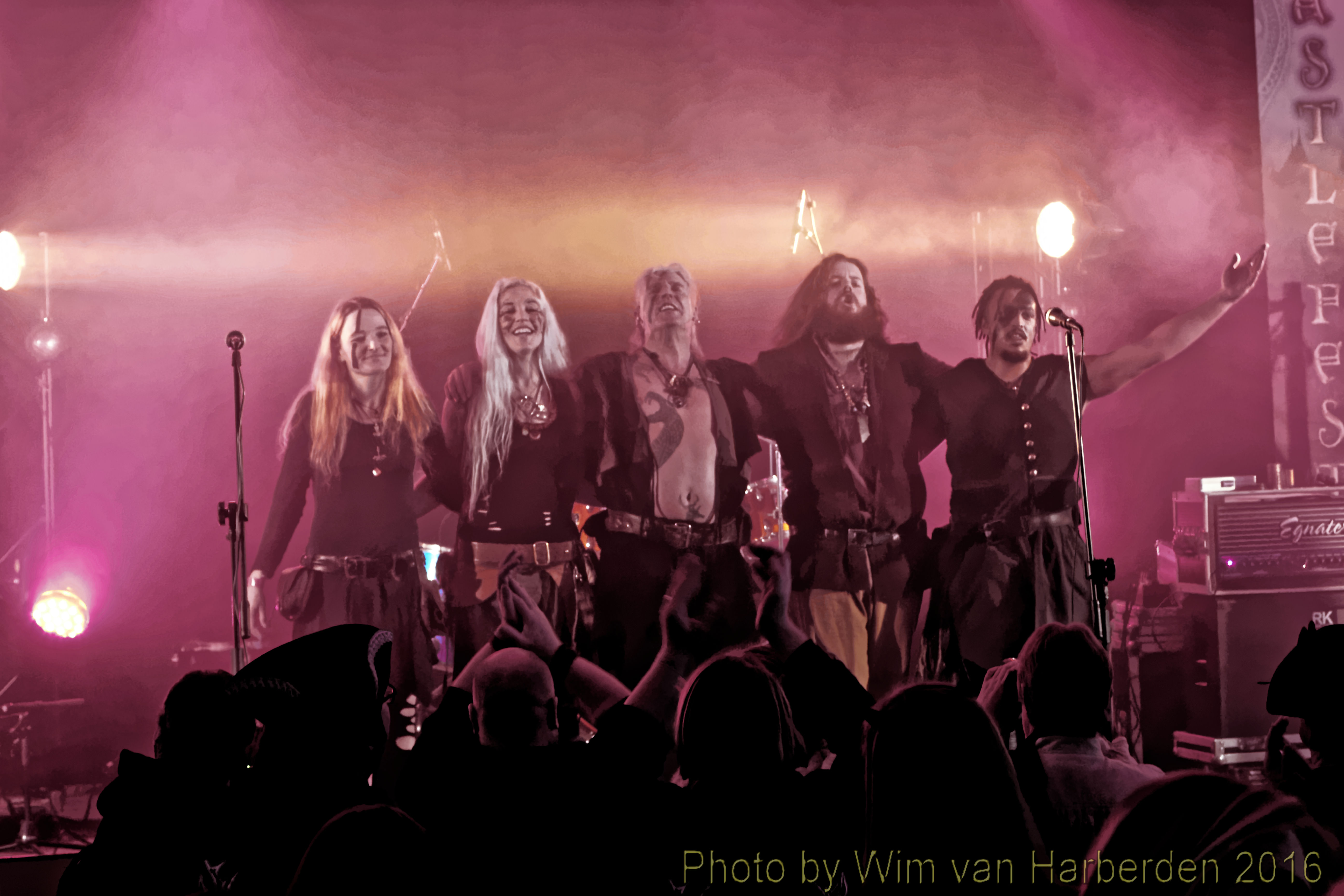 Interview with The Dolmen: We believe that to live is to dance and to dance is to live!

The Dolmen, ow yeah: party time! I don’t have to introduce them to the fans of Castlefest in The Netherlands, but it will be their first time at Trolls et Légendes in Mons, so here we go with the help of Marloes Visser who asked my questions (and helped me with the corrections) just before and after the band went on stage at Castlefest Winter Edition …

You are from the UK, but why did you call yourself The Dolmen?

Taloch: Well, the dolmen are stone structures that you can find all over the world. In the UK we have many of them, the most famous one is Stonehenge. And you have them here too in The Netherlands and Germany, maybe also in Belgium? It sounds pretty cool.

Pirate, Celtic, Folk, Rock … But of all you sound like a party gang, maybe that’s a better description?

Taloch: Yeah, we have many scenes attached to us, but yeah I would indeed say that The Dolmen are a party gang. We believe that to live is to dance and to dance is to live and so we say: music is about making people happy and that is what we end up doing.

Sometimes you even sound more Irish, with Indian influences or am I wrong?

Taloch: Well, I was brought up at the Island of Anglesey and we had a vast amount of Irish people who came to our Island. So I grew up with Irish music and English folk music. The culture of chanting is a part of every's cultures natural way of expressing themselves and so we do it all.

Looking at some YouTube stuff I see some tattoo’s, what are they about?

Rebel Fairy Fling sounds pretty cool and noticed that the crowd goes nuts from the first notes, how did you manage that? What is the song about?

Taloch: It’s build upon a traditional idea, and funny enough the actual words in the lyrics are actually quite sad, It’s a story about a girl who’s leaving a man who drinks too much and she’s going to experience life away from him. We were working on it and instead of keeping a sad tune we made a happy song out of it and changed it into a more bouncing and dancing song.

The Devils Table is another epic track that works very well, there is even a cool video, how did it all work out?

Taloch: It’s a song taken from the Banquet album and can also be found on the Kayleigh album and on the Live at Castlefest Album. We love to develop songs further when we're live: so you when you get the Banquet or Kayleigh album you get a version and when you get the Live Album you get another version of the song. The Devils Table is great song about a witch that gives a blessing the night before a great battle.

It’s the first time I review an album of you and noticed you worked a very rich sound, with even sometimes a change in the vocal leads, was that on purpose? Like this Taloch’s voice could rest a bit?

Taloch: Well, in the band you have 3 main singers. You have myself Kayleigh and Josh.Kayleigh has a fantastic voice, so she should be heard. And so does Josh. What is actually nice to do is to share the singing for certain songs that they sing so brilliantly. As we sing we are all the main singers.

I described your voice (Taloch) as raw, lived through and a bit like Arno, how do you feel aboutit?

I don’t know who Arno is, must be a guy from Belgium? Well, raw and lived through that’s pretty much like what we call a whisky voice.

I was very much into the clouds with the guitar play (Josh), can this genius say a few words about who he is, what his roots are and what influenced him? Not to forget to say how much I was impressed with the harmonica he plays!

Josh: Wow, thank you. Well, my musical career started from quite an early age. It’s mainly because my father got me into music. He used to come home with different instruments. I have learned a lot from him. What you find in my guitar playing is pretty much what I learned from playing other instruments. Sound wise I haven’t actually played with distortion in a great amount until I joined the band. It was more the harmonics and tones and that kind of influenced me forever. I just bonded with the sound and went from there. Working with Taloch, he's a great writer, and I really enjoy writing with him: it was fun writing tracks together. We really have talented people in the band. We created different sounds and textures and mix it into what it has become. It was great!

Josh also has a great voice, fits really perfect to the song he sang on the Nuada album, any words about this track (past and Present)?

Josh: Taloch started the piece, he wrote it and created a demo with vocals. He came to me and said: I wrote this song with you in my mind, would you have a go at singing it? I don't sing an awful lot on the tracks, but here I somehow really bonded with the track. I hope I gave it the feeling he was going for when he wrote it. As it happens we were both very happy with the result. I’m really hoping that you guys will like it too.

Nuada sounds like a special one, how did you end up with the God of the Sun?

Did you use a slidgeridoo at some point?

Taloch: No, we didn’t, it’s all in the voice. We do throat singing and we use the technique that makes the voice actually sounds like that.

Was it also on purpose that you wrote catchy tracks, sing-a-long moments and album tracks that will make it on stage (without even a try-out)?

Taloch: When we write music, we just write what we have and we like to think that we create something catchy.

I hear big US/country & Western influences, was that on purpose?

Taloch: The songs took out their own personae. It’s not like we sat down and decided about it. We didn’t know if they would turn out to be country rock or anything else. A song comes out the way it does and that’s it.

You played at Castlefest (summer edition), in the Netherlands, and more recently at the winter edition, how was that?

Taloch: Castlefest is an absolutely beautiful festival, which we really love, we love being there and being part of the whole energy. This festival gives a great energy, that’s what it’s all about.

In 2017 you’ll be part of the legendary Trolls et Légendes (in Mons, Belgium). It will be a special day, how do you see it? Will we see some Trolls on stage?

I think you can describe most of The Dolmen like Trolls, except for the girls. We guys look pretty much like Trolls! It’s going to be fantastic! We are so looking forward to be there, to perform and we are really excited about it!

Will you visit the day-time part of the festival too or do you have to go somewhere else? If you could check out certain things, what would it be and why?

We are going to be there during the daytime, so that we can have a good look around, enjoy the festival and also get to know and meet people. It’s always great meeting people. We might end up at the bar, you'll always find us at a bar somewhere. It’s going to be great to meet the audience and all the people around the festival.

It has been a habit that some bands invite people from other bands on stage, if you could pick out somebody from the current known list, who will it be and why?

Rastaban will be there and it’s always great to meet the guys and the girl they are absolutely fantastic people! We had Luka and Mich before drumming with us, so it would be lovely to see them back on stage and do a drum track together with them!

Is there something you want to talk about before ending this interview (talking about nature going to hell, the future, some feelings about how you feel …)?

I think it’s a great opportunity for the human race to express its own feelings now and aim to make a change, just like everybody just tries to make the world a better place to live in. Heal the earth, but also heal the people.

PS: live picture is from Wim van Harberden, we are grateful he sends us his blessing for using this picture.