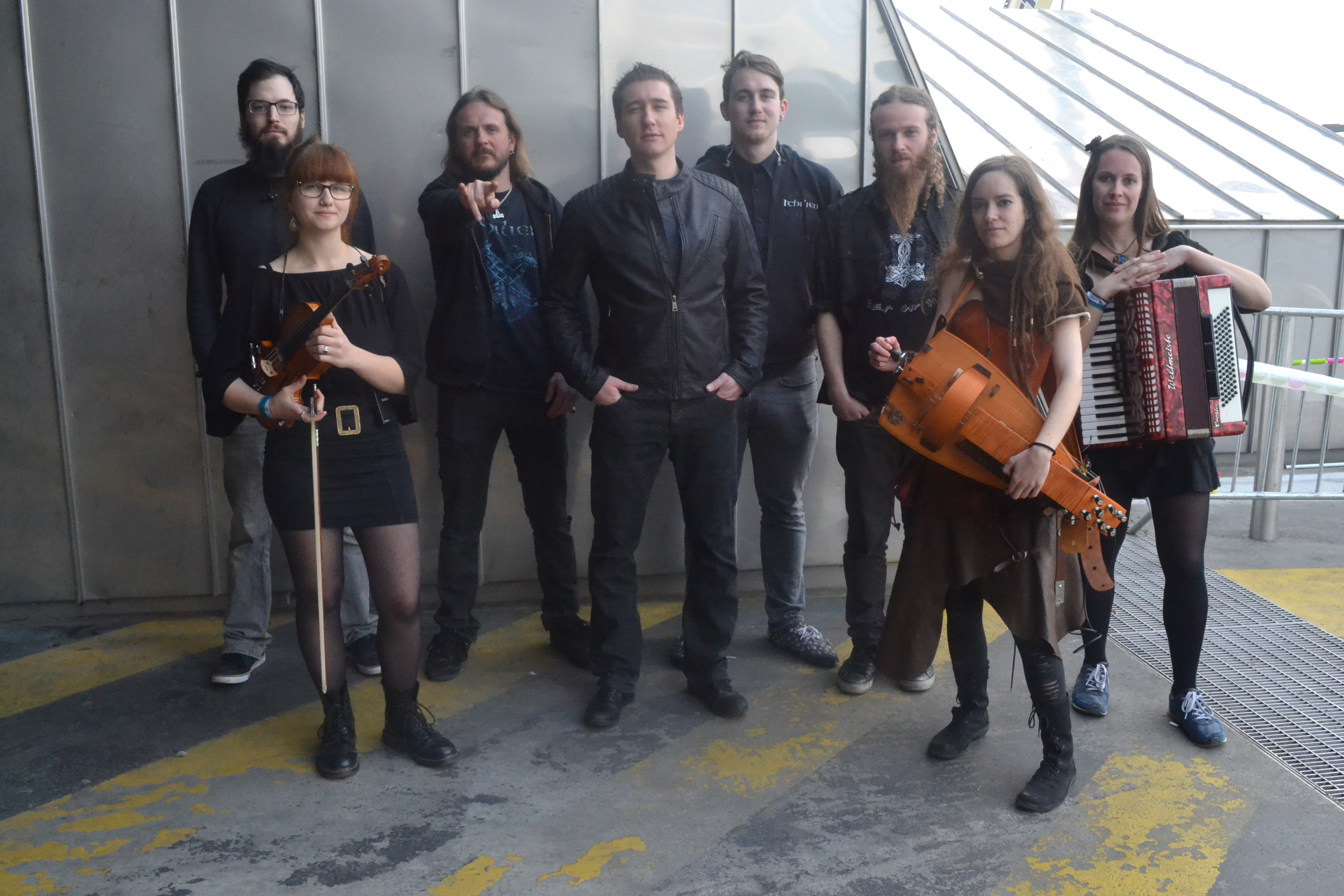 Interview with Ithilien who's looking forward to play at Trolls et Légendes and announces more things to happen in 2017!

Ithilien is a great folk/ deathmetal band from Belgium that will perform at Trolls et Légendes for the first time, they are already well known for touring with Eluveitie, but Erik Van Damme and I discovered that they still need a little introduction for some, so here we go …

I can imagine that some of our readers still have to discover who you are, so can you tell us a bit more about yourself: how did you all gang up and decided to start your band?

It all started about 10 years ago when I (Pierre, vocals, guitar & bouzouki) tried putting a band together. Unfortunately the first difficulty that you encounter when creating a band is finding the right musicians, those with the same goals, expectations and perseverance. With time I met those people and since 2011 things started to get serious. The project was already existing so it was really a matter of finding the right people... and I'm so glad we reached that point a few years ago, which gave us the opportunity to focus on other things, such as the music. You won't reach far if you don't have the right team.

A logic question: from where does this name come?

As a matter of fact, the name Ithilien comes from the Tolkien books. We really liked the name and thought it was a perfect fit for us.

I can imagine that some people also misspell your name, has it happened yet (on a Billboard or so?)

It actually happened only once that people misspelled our name on a billboard I think. We were playing in Tokyo with Eluveitie. But we just told the organizer and he fixed it.

You play with a bagpipe & hurdy Gurdy, who decided it had to be with these instruments, as they are not every-day instruments?

It wasn't really this kind of decision, it came naturally. Originally we were playing without folk instruments, such as 99,9% of regular metal bands. It is the folk instruments that came to us and that showed interest in playing with us. And with time they just became part of 'us'.

Was it also logic to choose for Flemish bagbipes rather than Scottisch (however a bagpipe teacher told me Scottisch have a better sound)?

Well concerning the bagpipes, we didn't chose for the instrument, we chose for the musician playing the instrument. Also flemish bagpipe is part of our own culture, in contrast to the Scottisch bagpipe. So to me it seems obvious using a Scottisch (or any other) one would be weird. And for the info of the readers, did you know there were more than 100 different types of bagpipes?

You already toured abroad, how was it? And with Eluveitie in Japan?

Touring is always a great time for us. And indeed we toured a few times already with among others Eluveitie and Skálmöld in Europe and, Eluveitie, Nasjap and Lycanthia in Japan. Those tours we amazing! For the near future, we are working some things out but nothing is decided yet. More will be announced soon probably.

We recently reviewed the new CD and was keen on the folky elements, but somehow the vocals feel like in contradiction with the sound, is this antipode on purpose to push out the difference between good and evil? Light and dark?

Well our music is really a mix between the folk style and death metal. I'm personally used to listening to bands with harsh vocals and so do not really feel the contradiction. To me it is the same as using clean vs distorted guitars, meaning clean vs harsh vocals, if you know what I mean. Now of course, if you’re not used to this kind of vocals, it's quite difficult to appreciate it. You definitely will need some time to get used to it and feel the feelings behind. Anyway, this is the way I sing and the way I can express the most my feelings with my vocal cords. There's not really such thing as defining the folk instruments a good and other instruments as evil. All instruments and lyrics work together towards one same goal, the overall harmony to express certain emotions. This is especially true for our latest album Shaping the Soul which is all about grief.

How are the reactions about the album (Shaping the Soul) so far?

The album Shaping the Soul is actually not available worldwide yet. It will be released on february 17th 2017. But the reactions so far from family, friends and webzines were even beyond our expectations. And that feels really good!

Who came up with the idea and main story for the album?

The concept behind Shaping the Soul is the grief process. It is when you lose something or someone important that your personality changes, that your soul is “being shaped”. Grief typically is theorized in about 5 different stages which you have to go through before acceptance of reality. These stages are typically denial, anger, depression and bargaining which draw the red line of our album. To me Shaping the Soul worked as a kind of therapy. It meant an important introspection while writing the album during which was a dark period of my life. And with Ben (bass player) we wrote the lyrics in such a way that everyone listening to it could understand and fill it with his own story, emotions and experience. I'm really proud of the result in the end because it is exactly as we had imagined it!

How was it to work together with WormHoleDeath? Did it open more doors for you? How did you end up working together?

Concerning our new label Wormholedeath, we just started working together and so far, it's a really good fit. Carlo which is the boss is really nice and wants to do everything to help us move forward. We're really excited to work with them!

The Bear Dance sounds a bit different from all the other tracks on the album and feels like the perfect closing track for gigs, was that on purpose?

The Bear Dance (in french ‘La Danse de L’ours’) is a traditional central European song which we adapted to our FolkCore style. And indeed there is a difference with the other songs of the album, which is the fact its emotional response is much more positive. A grief process goes through many different stages before the acceptance of reality. That is what The Bear Dance represents in Shaping the Soul, the last song, the last stage of the grief process, the acceptance and emotional relief.

You also launched a video, how was that? Are there more plans into that direction?

We recently recorded a music video for the song Blindfolded. The video clip will be available on 9th of January, so stay tuned on our website and Facebook page.

Can you tell us more about the whole idea behind the track Edelweiss?

Edelweiss is about the feelings you have when bargaining is over. It is a mix of sadness and regrets, you cannot refrain from blaming yourself for what happened. Maybe you could have done something different, changed the course of events, ... But in the end you realize that nothing will be the same ever again.

How much of an evolution has the band gone through since the beginning?

To me the band really started in 2011. Before that it was more a garage band that was searching for its own identity. Since 2011 there has been some evolution on a musical and personal level thanks to the great musicians in the band themselves. In fact, think this evolution is best expressed as maturity.

You will play at 'Trolls et Légends', what are your expectations?

A great organization, an immense stage, an amazing crowd, a special moment in our lifetime, … and a dream come true. I’ve been at Trolls et Légendes many times and enjoyed it each time even more. For the first time I’ll be on the stage and not in the crowd. We also know we’ll have a lot of fans present that day. It’s going to be amazing!

If you could invite somebody on stage from the same festival, who would it be and why?

Well I wasn’t going to tell everything today but if you ask me, we are indeed planning on bringing some guest musicians on stage. We’re still working on that but stay tuned on our social media because we’ll announce.

If you could interview Warduna and Korpiklaani what would your most important question be?

I personally would like to know about their childhood, what they did, what they liked, … how did they get the taste of music and things like that.

What are the ambitions for 2017? Future plans?

Well in 2017 our album Shaping the Soul is going to be released worldwide, so our ambitions for the next years are playing a lot of shows, playing festivals and going on tour again. These are the things we would like to achieve for 2017 for sure.

Thank you for your time and support and we’ll definitely see each other in Mons!

One more thing, as we get a lot of questions from people, and we’re actually planning to answer them with videos in the near future. So if anyone has questions, just go to www.ithilien.be/faq.html
Cheers!

Following the release of our new album "Shaping the Soul" on February 17th 2017We will answer all of your submitted questions in video!Don't hesitate, fill in the form and ask us anything you want to know! Back to website Your NameYour EmailYour Question(s)245 characters max.