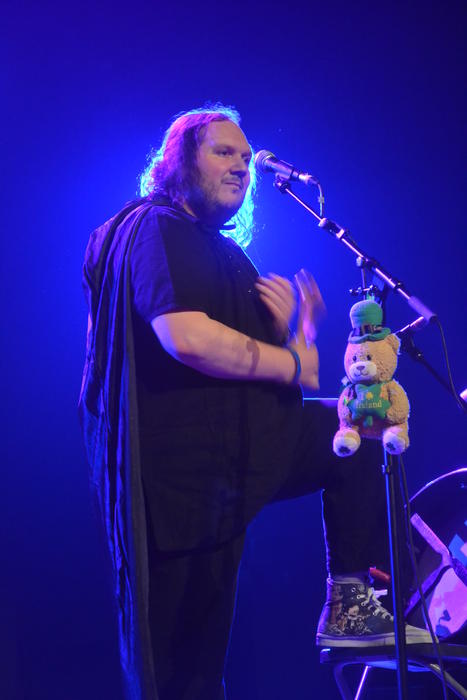 Interview with Naheulband that play at Trolls and Légendes and dreams about playing at Hellfest!

Naheulband is a living legend for the Trolls et Légendes fans, they played since the first edition and got pretty fast the status of headliner. I already had an interview in the past with them, but Ghislain, Tony, John and Ladyfae granted me another interview and they still have so much to tell and keep looking forward …

During our last interview you hoped to come back and so are you: Trolls et Légendes 2017 will be a blast! How does it feel?

Ghislain: It feels great ! We love this festival so much, it is a really good news for all of us.

The last edition was sold-out, it all started with the first day, your big day and the rest followed. How does it feel to be called the house band of a sold-out event (in numbers with at least 3 zeroes)?

Ghislain: Actually, it was really good to be the only band to get a sold out evening. But it is great for the festival to have such a popularity. And the fact that we are called the house band is great because we will come again and again !

Ladyfae: I really love Trolls & Légends. The volunteers and the organization are nice, the festival and the medieval market are great, we really have a good time there. 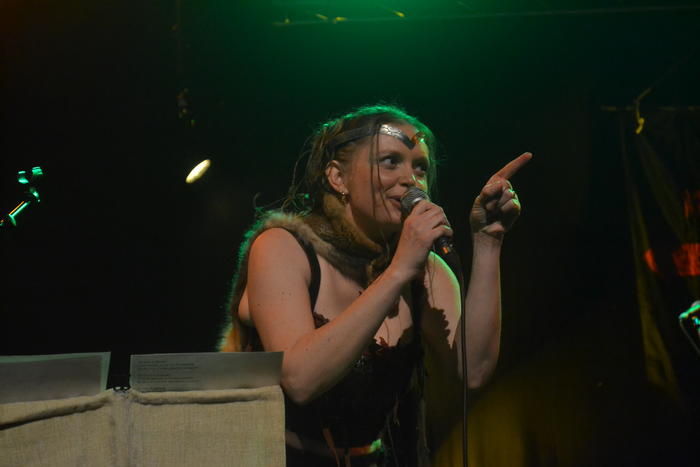 Tony: I agree with what my friends just said. For all those reasons, this festival really feels like home to us. It's so great to meet the same crazy audience every two years, and also our draft beer machine backstage!

With how much people will you be on stage? Can we expect some guests, this time? Was there a change in line-up since the last edition?

Ghislain: we will be 6 on stage, the full band and we will have a really special final with our friends from Magoyond.

2016 was the year of our heroes who die (David Bowie for me), Joe Dever for you. Whom else died in this year that you will miss terribly and why?

Ghislain: The French Cartoonist Gotlib just passed away and he was amazing. Joe Dever was a great guy, an accomplish writer and a bass player as well. Ron Glass, who played Sheperd in Firefly is a great loss too. I also regret the passing of Maurice Dantec, an amazing thriller and sci-fi author. Of course, the death of Alan Rickman was a tragedy ! 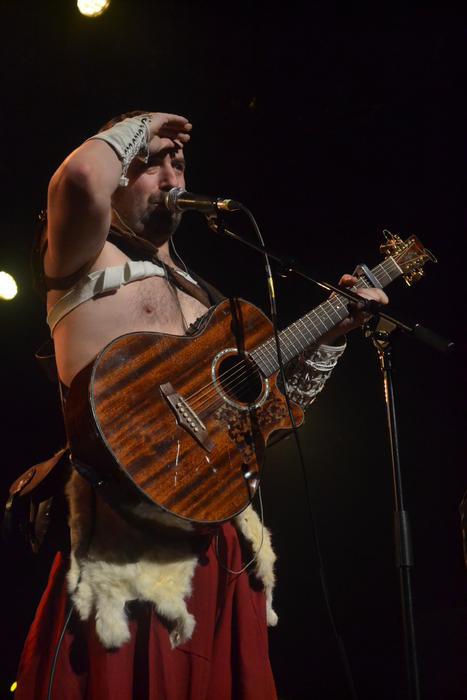 John: 2016 was a very bad year on so many levels. Please stop talking about it. I'm just glad it's nearly over !

Do you think there’s an afterlife with people playing the Dungeon of Naheulbeuk and other kind of fun things or is it more the Viking Valhalla? Or 70 virgins (but hey with Lemmy around …)?

Ghislain: Valhalla will be nice but I will probably get rejected because I used Smart instead of Strength

Tony: I believe we should meet Lemmy, because there can be no afterlife without a god, and we all know that Lemmy IS god!

Can you tell the readers who still have to discover you yet what’s the madness about?

Ghislain: Well, our music is about useless role playing game characters doing stupid things on adventures. It is really funny. If you don't speak French, no problem, the music is good enough to make you dance and have a good time.

John: Naaaah... They are not useless characters ! They just mix bad luck with a lack of judgement...

This time you will have The Dolmen and Magoyond as warming up bands, do you know them and can you tell us more about them?

Tony: Magoyond is an excellent rock/metal Zombie band. Their lyrics are about horror stories, with a big load of madness, and we know them very well because not only we've been sharing the stage many times in the past, but we even share a common member: Julien Le Mago, who's at the same time the lead singer of Magoyond, but also a member of the Naheulband since last year. I also replaced their lead guitarist once, and their keyboardist (Aspic) did some flute with us recently.

Ghislain : I never saw a concert by The Dolmen but I love their music. It will be the perfect time to watch their show with a splendid audience!

You might also meet Alain Poncelet, what do you think about his work? Might it be that one day you sit at the same table and start thinking about a project together?

Ghislain: Alain is a great illustrator and I already own my Skeptical Minds album with a really nice personal drawing. I can’t wait to see the 2 shows on Saturday and Sunday.

Can you tell us from where does this Poulet Poulet … scream come from? How did it started as for now it sounds like the Trolls et Légendes anthem?!

Ladyfae: In fact it all started in Trolls & Legendes a few years ago. In a middle of the song called "Le Laridé du Poulet" which warns about the chicken, a very nasty creature, the public is invited to sing "Poulet poulet piou piou piou". This was already quite stupid and ridiculous. But in 2012, we decided to make it more ridiculous by wearing a chicken hat and making up a choreography so that the public can be as ridiculous than us. And it worked ... too well !

Lots of people started to sing that everywhere. We love it!

Ghislain: we want to apologize to all the bands that get a lots of weird shouting during their performances. It seems that a lot of people use the Poulet gimmick to try to locate themselves in the crowd and that's not working, because when someone begins to sing, all the crowd continues!

I read that you are hoping that your fans will scream it too during Wardruna and Korpiklaani?

Ghislain: Absolutely not! I hope fans will respect the work and music of the other band. In 2012, I suggested that the audience use Poulet Poulet Piou Piou Piou to get an Encore from any band in the festival. It was a bad idea, people used it for anything now. But it seems that it is even getting worser because I heard about the festival that the crowd was even shouting when we weren't playing at the venue. So, sincere apology to all the bands that get disturbed by our stupid little war cry.

With our last interview you told me you were all still pretty active, what did you do over the last 2 years (in a creative way)?

Ghislain: I wrote a few short stories and get some published. I also played music with The Deep Ones, Maigh Tuireadh and Skøll.  I am currently working on a few Role playing games for a new game company.

Tony: With my symphonic metal band Qantice, I did a European tour with Luca Turilli's Rhapsody, which was an incredible experience. And right after this, we started working on our third album. Right now, we're in the middle of the recording process.

John: On my side I've been busy building the Donjon de Naheulbeuk at a deeper lever, by enhancing the RPG with a giant monster book; it will be used in my future writings, songs and stories. And as it was a massive piece of work, it's pretty much all I've done since the last time we came to the festival!

Ladyfae: I worked on a campaign for the Donjon de Naheulbeuk RPG and I am still working on the second part. It was a lot of fun to write it!

Are there new stories and what are they about?

John : The Donjon de Naheulbeuk is a RPG adventure. What can we say about that ? Well... It only ends when all the characters are dead. For now, they managed to stay alive. I wrote five books so far, with the idea that the main storyline is over... But there are a lot of possible things to come. Of course anything I write can, afterwards, turn into a song. The thing is: we already have a lot of songs, and a lot of them are "the good old ones we cannot remove from the set". So, adding more songs to our set will only make things more difficult to handle, once on stage.

Are there still some new things to discover or new things you want to try out?

Ghislain: Well, we will play with our friend of Magoyond and it is more rock'n'roll than usual. Perhaps later we could try with a symphonic orchestra or a full bagad!

Tony: I'd like to try making love with four robots in a Jacuzzi filled with hot chocolate.

Is it true that you have never played at the Dour festival? Wouldn’t that be a nice goal?

Ghislain: We will be glad to do it ! The thing is that we never try to play in a place, we just wait to get contacted. But I'll love to play in a few festival I like, like the Hellfest in France for example.

How long do you hope that the fellowship of Naheulband will go on?

Tony: I think it will go on till after we die: I can't wait to see Lemmy singing "Poulet poulet, piou piou piou"! Ah ah.

Ghislain: Or Ronnie James Dio with the Goadec sisters!

Any future goals or dreams? A gig in Canada?

Ghislain: We already toured twice in the frozen land but we'll love to do it again. I hope we find some time an inspiration to work on a new CD, it will be nice to have new material and new song to play next time.

Ladyfae: We had two  wonderful trips in Quebec, met lots of people, had fun... hope we will go there again.

Tony: Yes, I have something very important to say: winter is coming... but don't worry: after winter comes Trolls & Légendes!

Ladyfae : you can also sing "Poulet poulet piou piou piou" and dance the wonderful choreography we made: it keeps you warm!

Thanks a lot and let’s keep up the good work of all the volunteers and Trolls et Légendes lovers!

And for the history, here's the famous track, with lyrics: