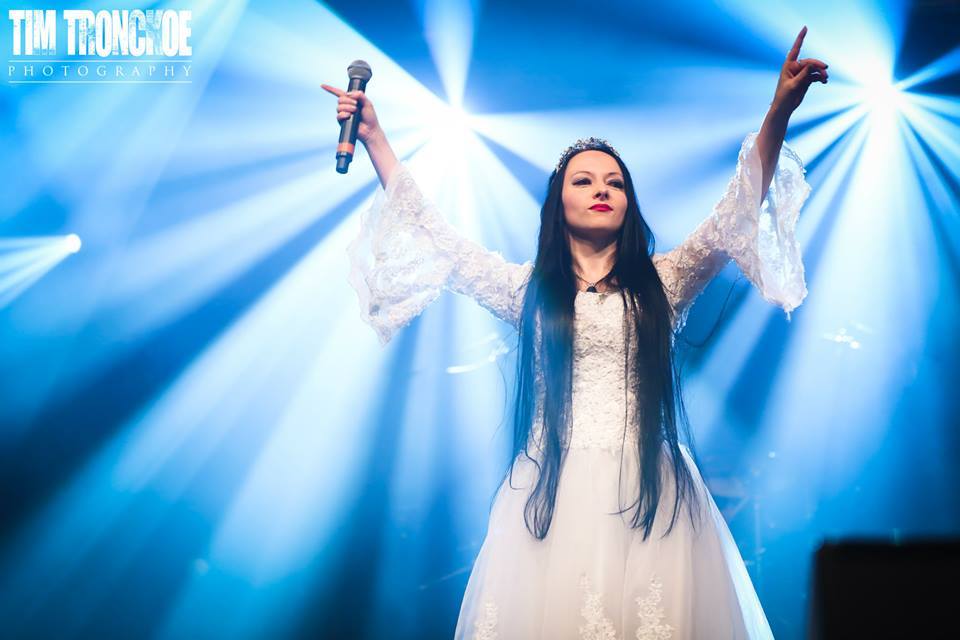 Karolina Pacan will perform twice at Trolls et Légendes: with her band and solo. I already had an interview with the band and with Alain Poncelet, now it’s time to unveil more about Rusalka and the little stories …

Karolina Pacan I want to start with a question that I wanted to ask for a long time: is it right that this name is your artist name and not your real name?

You are originally from Poland, how did you end up in Belgium?

In fact, I was in Netherlands when I met Skeptical Minds. They were looking for a singer and I was looking for musicians. We did practice for 6 months in The Netherlands and then, when I felt integrated to the band, I moved to Belgium to be with the band. I just follow my way, wherever it goes. I left Poland, I went to Ireland, then to The Netherlands and now to Belgium. And the journey is not finished ! All the steps were good surprises for me. And I do my best on each step.

Can I say that you found yourself pretty fast a band (Skeptical Minds) and united Europe whilst making music: a Greek, Italian, guy from Belgium and yourself …?

I was lucky to find Skeptical Minds, But it was 2 years after I left Poland. It took 2 years, and many adventures before I meet them. Indeed, one interesting thing about the band is that we all are from different parts of Europe: Poland, Italy, France, Greece and we all live in Belgium. In fact, the others were born and lived in Belgium. I just joined them after.

It must be easy if you are touring in Europe, there’s always somebody who can do the talking and know about the local culture?

Indeed, in any country, we feel comfortable. In fact, we feel good everywhere and we feel familiar with many people because we are used to talk about our cultures, our differences and we also meet people from everywhere. In some places, it's good to have a local person, like in Poland or Greece. That creates special links with the local audience. When we play in a country where we can speak the local language, it breaks the ice immediately. We have many examples : France, Netherlands, UK, Greece, Poland etc... We all are Europeans, but when you can have something more local in common, it's like a bonus.

At some point you decided to create next to your band your own music, how did that happen?

I always wrote music and melodies. I love metal and classical music but one of my passions is folk music. I always wanted to make my own side project and that's why I was looking for musicians when I met Skeptical Minds. We put my side project in the fridge because Skeptical Minds took all my time. After the Omega Thanatos album, we decided to take one year for that project. I spoke with Alain Poncelet and Mich to see if they were in for that project and that's how it started one year ago. The comic book is finished and will be released in January. The CD album will be released in April and will be presented live at Trolls & Legends festival.

At the last edition of Trolls et Légendes you sang in Polish together with Rastaban, which song was it and how did it felt to play together with them?

In fact, it was in Ukrainian and the song was called “Moja Dusa” . It was very exciting to sing with them because I love what they do and I enjoy that festival. Rastaban are simple guys, no big heads, very cool and funny. That's also why I was very happy to be on stage with them. It was very fun , like we did that many times before. I felt very well and I remember it as a very good memory!

Two years after this, you’ll be back on stage, twice. How does it feel? What can we expect at Trolls et Légendes, on stage? A lot of visuals, some duets? A tribute to Lemmy?

Many questions (laughs). Yes, this year, i'll have the chance to perform twice. First, I was supposed to present Rusalka at the festival. And few months ago, the Festival contacted Skeptical Minds to propose them to play on Saturday. They planned to make a more metal day. That was a surprise for us and of course, it's very special to perform two days with two totally different projects. For both projects, we released a CD and a comic book made by Alain Poncelet. If projections are possible, we'll prepare a visual show in order to mix our music with the visual universe of Alain Poncelet. About the duets, we don't know yet. Lemmy tribute? Hehe I know what you mean. We are used to make it but since one year, more than ever. We didn't choose the set list yet, but wait and see; who knows?

Do you think you might invite some people from Rastaban on stage and return the favor?

Nothing is planned yet but it could be a good occasion for that; we also share the stage on 15th. Wait and see.

Can you say something about the new Rusalka project? Working again together with Alain Poncelet (and even his son) …

Everything started from a story I proposed to Alain and Mich. Rusalka is a character present in the polish mythology and also in other eastern countries. She's an immortal creature who seduces guys and then she kills them to take their soul and energy that feeds her. I won't tell you how we developed that, but the idea was to put some elements of polish mythology and history in this project. We decided to make a comic book and a music album. Both will tell the same story in two different ways, like we did with Skeptical Minds for Omega Thanatos. Alain made the comic book with Valérie Reniers and Mich. I will sing on the musical album and the music was written by Mich and me and developed with two other musicians : Félix Poncelet (Alain's son playing all winds) and Christophe Van Cappelen (percussionist). The music will be folk traditional acoustic music. No electric instrument but only  traditional acoustic instruments : Flutes, baggpipe, cretan laouto, cretan lyra, cretan mandolin, mantoura, chamanic drums. It goes to the deep roots of Cretan and Polish traditional music. That's how we tried to build it.  The lyrics will be in polish.

I know that Polish is your native language, but still: why in Polish and not continue in English?

Because Polish fits very well with the story. When you sing Easter legends in Polish, it gives a different color to the song. Mich and Alain also found it interesting to make it sound different than what we are used to hear. We love traditional music from other countries , it sounds very local when people sing in their own language. It links you to their roots. That's what we wanted to do.... as the story is linked to polish history, we wanted to keep the spirit as close as possible from the roots. For the music, it's different thing. As most instruments are from Crete, the sounds and compositions are influenced by that. The result is a mix between Cretan and Polish tradition.

What are the lyrics about?

The lyrics tell the same story as we tell in the comic. I won't develop the details here: I'll let you discover by yourself.

Most of the influences are Cretan folk and tradition, but also Polish and even a medieval touch. How did it all mature and grow out to become real songs?

Mich is Cretan and swims in that tradition. I also sent him melodies and songs I wrote. Mine are more medieval or Polish style. Mich combined the spirits, using his own instruments and sounds. The result is a mix of all those influences. The result is just a mix of feelings, of ambiances, of emotions we wanted to create with our personal influences coming from our cultural roots and traditions.

I hear fragility in the songs and purity. It’s clear that we hear a great vocalist in action, as I feel like we get finally a definitive proof that you are a great singer (next to the fact that you are a whirlwind and tiger on stage). It clearly opens new paths, right?

Thank you for your words. In an acoustic album, it's different work. Nobody can hide behind noisy electric thick music. Every sound is clear and pure. Every mistake can be heard. Even if the songs can look simple, you have to work more to sound good. Here, I sing in a way I always loved to sing. It's just another part of me I cannot always express in Skeptical Minds. In this project, I can show myself in another way. For sure, it opens new paths. It was very interesting to explore that new way and I already can tell you that it's just a beginning because we all had fun to do this and we already want to go further to explore more things. 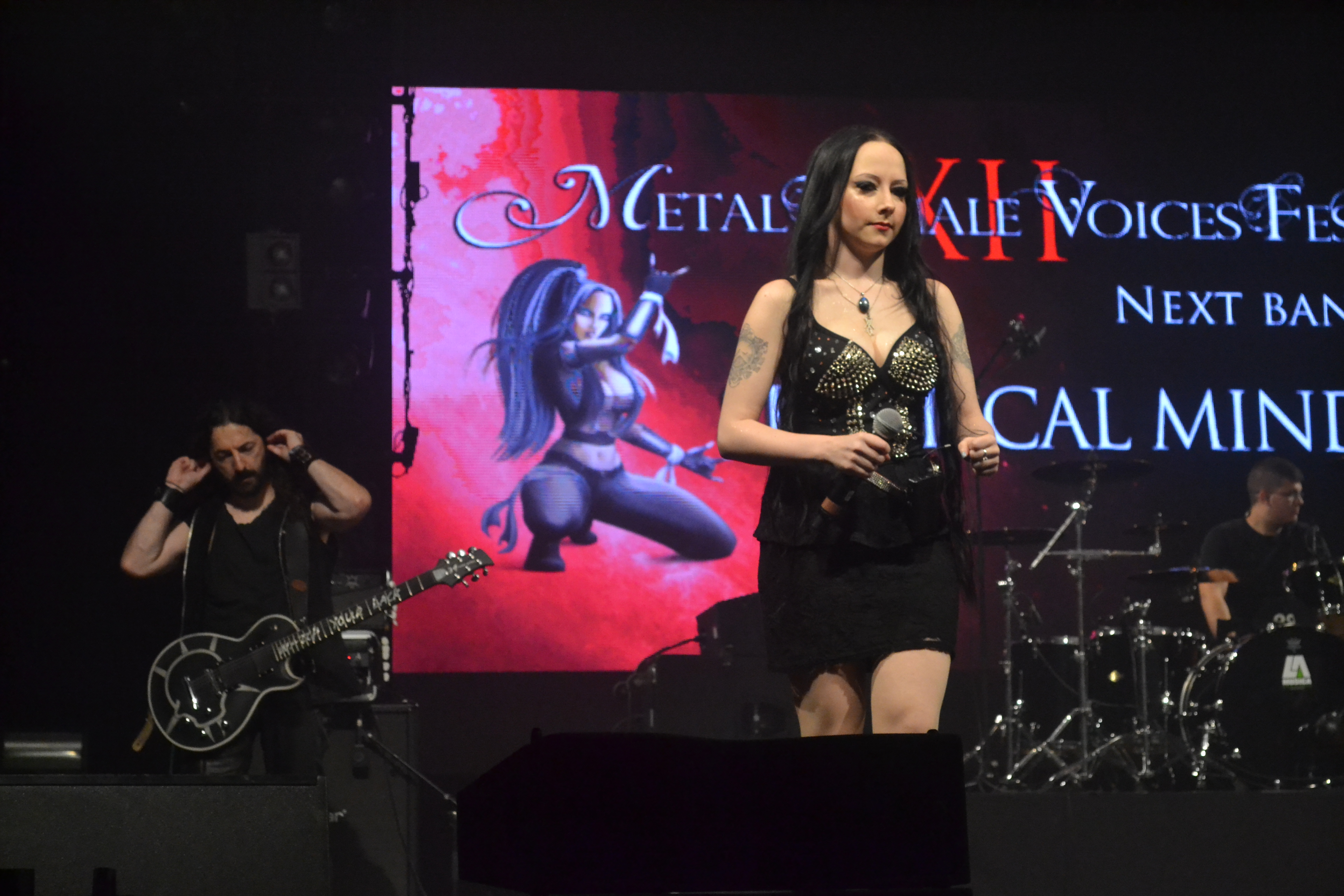 I even hear some flutes and bagpipe (who will play them in the studio: Acus Vacuum?), that is a complete new sound for you, right? Who came up with the idea?

All the winds are played by Félix Poncelet. He's very talented and can play many instruments : Saxophone, Clarinet, Flutes, bagpipe etc... He studied most of them and it's comfortable for us to have such musician who can play many different instruments. That gives different possibilities. In fact, it came naturally... when Mich told to Alain how he saw the music, it was almost obvious to try it with Félix and they both agreed they had to ask him and of course, he was enthusiastic because he's very fan of that kind of music.

Korpiklaani and Warduna will be the headliners when you will play, any questions for them?

Ummhh... How do THEY feel to be headliners at Trolls & Legends?

Many gigs ! We are booking many gigs with Skeptical Minds in different countries. We'll move quite a lot in 2017. Rusalka will be presented at Trolls et Légendes and then, we'll see how it will go; for the moment, we focus on the recording , the release and Trolls & Légendes. We'll promote it after but no other gig is planned yet. More news will come later for sure.

No dreams about me and my bands because I already explained above; things are going well. If I can make a dream and wishes, I would wish for the world to have a better year than 2016. We had lot of bad news and bad things happening. I really hope 2017 will be more positive and peaceful. That's my dream. Thank you!