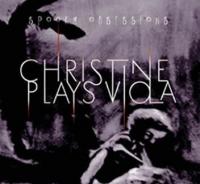 Never heard of Christine plays Viola before, but they will play in our country as warming up band for Das Ich and we totally loved their latest album. So our reviewers Erik Van Damme and Filip Van Muylem decided to go for it and expose them to our readers who deserve to get to know them much better!

Christine plays Viola sounds like special name, how did end up choosing this name?

Our monicker sounds like a tribute to the likes of Siouxsie and the Banshees, where Christine, the protagonist of their song distressing and gloomy and elected to extreme synthesis of the fragmentary nature of consciousness, plays an instrument sounding sweet and gentle as the viola is. The result is a sort of contrast between the darkness and the light.

The band grew slowly, how come?

The project was born around 2008 from an idea by Fabrizio (guitar) and Daniele (drums) to which were added shortly after Desio (bass) and the former singer Christian. Originally the band had not yet very well defined identity: in it flowed elements from indie rock, inserts wave and a focus on the development of airy environment partly alienating. With time and also as a result of Massimo’s entry, the band following the departure of Christian, the shot of our compositions is definitely pushed towards darker sounds and direct with the intention of recovering some sounds of the 80’s reinterpreting them with a personal approach. After releasing some self-produced demos, in 2011 we released the first album "Innocent Awareness" for the German label Afmusic. The known journalist Mick Mercer includes the album in its top 30 of 2011. The second full-length entitled “Vacua” was released in 2014 from Cold Insanity Music a concept album inspired by the series of Black Paintings by the Spanish artist Francisco Goya. In 2015 we released a 7” Vinyl EP entitled “The Stars Can’t Frighten” for the French label Manic Depression Records. In 2016 our latest work titled “Spooky Obsessions" produced from Manic Depression Records.

Can you tell us something about your local scene and the scene in Italy (in general): is it hard or is easy to make your way?

It’s really an upsetting situation for emerging groups in the territory on the national scene: many locals are in the hands of managers who prefer to always give space to actually definitely more 'sellable' bands or projects without regarding to the quality so as to involve as many people as possible to exclusively accumulate money, merely a laughable reward for musicians and totally snubbing small but promising reality that animate the undergrowth italics ... Musical genres unconventional or maybe not at all 'mainstream' are almost completely banned or even worse we’re powerless witness to the phenomenon of cover bands that enliven the nights of unspecified multitudes of people cheering but not as provided for artistic identity. We feel part of the darkwave scene and in Italy there are surely considerable bands, but in our country, we do not enjoy probably of particular esteem and find it hard to play, while abroad, things are different; then it is evident that in fact there is a cultural problem. Clearly ... with the passage of time, become aware of this, we tend to turn our attention elsewhere.

If I listen to the new album I hear a lot of influences from the 80’s: The Cure, Bauhaus, The Essence, Joy Division, Merciful Nuns, Red Zebra, The Sound, … Am I right on this?

We are attracted equally by the impetuousness, the essentiality and the drama of a certain post-punk spirit to which we combine a more decadent, passionate and evocative borrowed from gothic rock genre but I assure you that this is done in a natural way without no premeditation. It 'clear the influence of the Anglo-Saxon  wave / goth scene of the 80’s in our sound (and we speak then of bands like The Cure, Bauhaus, Killing joke, Virgin Prunes, Siouxsie and the Banshees, The Chameleons, Joy Division, The Sound, The Mission, The Sisters Of Mercy, Fields Of The Nephilim…) as well as the influence of the synthpop music for the vocal lines (and we speak of bands like Duran Duran, Tears For Fears, Depeche Mode…) and also of ambient atmospheres for the sound carpets. each element is properly mixed and each of them contributes to create a sound definitely kaleidoscopic. Inside the band everyone has a definite personality and different are the listens of each one, everything inevitably has an impact on our proposal.

There are a lot of bands swimming in the same pool, for some it’s a fatal error, as nobody is waiting for yet another band playing the same retro style, yet you convinced me with a modern approach, great studio work and great vocals (well: read the review), is it hard to step out of the light and get some exposure and make the difference?

Thanks a lot for your compliments, well I think that the particularity of the band is that of being able to create a personal sound into which various elements apparently even distant: a bleak classically based darkwave, shows cues ambient, electronic and alienating vocal melodies not necessarily related to the stylistic features the dark altogether. As you said, today It’s no easy to make the different in the music world, in my opinion the most important thing, we must be sure of having given everything without regrets. we try to touch the hearts of people sensitive, emotionally prepared to accept the different nuances that permeate our music. Our hope is that our songs will cheer the hearts of many people as possible.

What are spooky Obsessions for you?

Spooky obsessions are stories of people at death, reminiscent of the trauma suffered in the life and concerns that have gripped their souls and their minds. Evil, fear, obsession, demons are all alive in their mind !! Vehement is the anxiety that causes the mind to succumb to visions tormented, troubled emotional paralysis testimonies, harrowing nightmares. The analysis of the various situations pass through the evocation of different shapes, each with its peculiarities.

The lyrics are dark, scary, sometimes even a bit depressing, is there a cure for so much negative vibes?

I think that one way to exorcise the fears and obsessions that accompany the life of each of us is an introspective game, through the need to look within yourself to a clearer possession of our existence. Man's salvation lies in the acceptance of their fragile nature, through the creation of images of his own many prisons in an artistic exercise that exorcises the power and try to undo the despair.

What does the N.D.E. mean in the song N.D.E. (Life Beyond Life) and what is the song actually about?

This song describes the moment of death: a trip out of the ethereal and rarefied contours that consecrate the spirit as a higher nature entities projected to eternity, a symbol of divine perception.

What does Ossessione mean and is the singing partly in Latin? The music also sounds a bit different from the other tracks, right?

Yes you’re right, Ossessione is our first track sung in Italian and for this reason we wanted to make a different song than the other one from the album, The lyrics is quite easy and immediate, few words, straight to the point.Try to think to a man falling from the last floor of a skyscraper, he has few seconds to remember his life, few seconds to think what will happen after he will be crashed on the ground. This is the idea behind ‘Ossessione’.

You also made a video for it, can you tell us more on how and where it all happened?

This was an idea of our keyboardist Daniele Vergni, evidently, we thought that it would has been quite difficult to bring on the screen the subject of song, we had no much money to make it and so we shot the scenes inside the flat of the guitarist of band Fabrizio without actors, just us during the whole video.

I noticed you have a lot of tattoo’s on your body, what are they about?

The meaning of my tattoos are very personal, in general I can say that the predominant feature is an opposition of contrasts, the eternal struggle between good and evil, chaos and the reason that are an integral part of my personality.

In the past you toured with a few of my favorite bands like Whispers in the Shadow, Clan of Xymox, The Exploding Boy how was it to play with them? Any funny stories happening backstage or on tour?

Yes we played with their in a wonderful event took place in London, this festival titled “SOS ALT-FEST” has been put up in a few days, after that the ALT-FEST was cancelled due to financial issues. It was awesome sharing the stage with great bands and we had wonderful moments there, it was a blast !!

You played at Leipzig: one of the biggest festivals of our scene: how was it?

We played in several good festival around Europe but the WGT is really wonderful, we have had the lucky to play in front a lot of people and we received great feedbacks from there. Germany is among the best nations if you want to get an excellent stage for your band.

You signed up for a tour with Das Ich, how did that happen? I ask this as you have clearly two different pool of fans, right?

I state i’m a fan of ‘Das Ich’, we received the proposal from Alain the promoter of the gig in Belgium and we accepted immediately, without to think twice , yes we know that our proposal is different, but we'll make our best for crowd and we hope that they ‘ll appreciate anyway our set !!

It will also be your first time in Belgium, the gig might be  a stepping stone for more gigs in our country, right? How do feel it?

Yes this it’ll be the first time in Belgium for us and we can’t wait to play in your wonderful country. In the past we received other offers for playing  in Belgium but we decided to wait a good opportunity to play in front a huge audience and today we can say that this chance is arrived !!

We’re working hard on a new European Tour and you’ll find all dates on our social media soon, furthermore, in the next summer we’re planning to play in USA for the first time. Regarding the work in studio, we have some unreleased b-sides that we decided to put out ‘Spooky Obsessions’ and that definitely they will be published during this year.

Thanks for this interview, may all you wishes come true in 2017! See you in February !