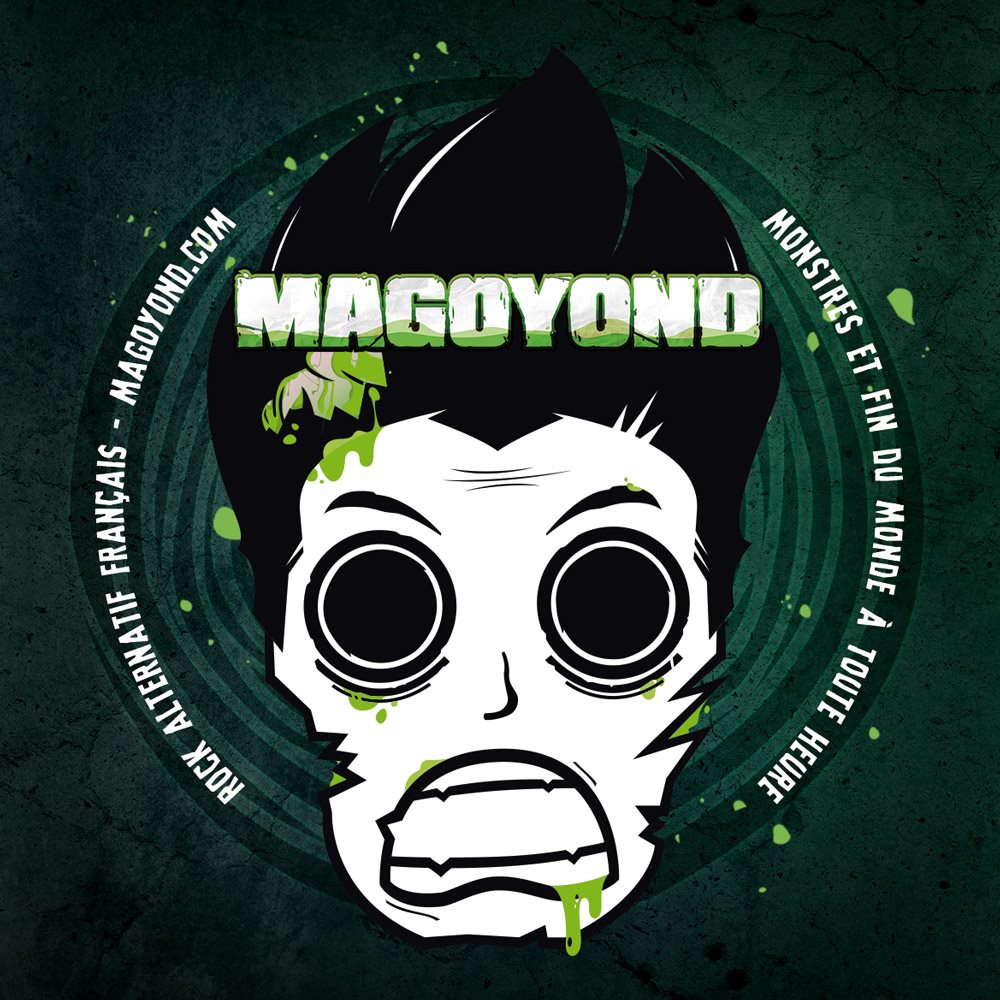 MAGOYOND: interview with Monster Rockers who will perform at Trolls et Légendes!

The first day of Trolls et Légendes is always funtime, never expect serious things, just go for the fun, laughter and discovery of new talents … Today’s interview comes from France with MagoYond who will play in Mons for the first time …

My logic starter: what is the meaning of the bandsname?

Le Mago: In 2007, when MAGOYOND was created, the music part did not yet exist at first. We were two, Mago and Yond (who left in 2013), doing funny audio dramas on the internet. Then, a friend suggested us that “MAGOYOND” name because it was meaningless, so it was a match... The music part was complementary to our creations, but the real band as you know it now, musically speaking, was set in 2010. Today, everything has changed ! We’ve been through a long hesitation but we decided to keep the name and to extend our own universe around it.

How did it all start and why did you choose to sing about monsters?

Le Mago: At the beginning, we were only singing “funny” songs about people madness. No monsters, no atmosphere... only jokes with an alternative rock musical background. Then around 2008/2009, after watching and watching again for the 50th time “Shaun of the Dead”, the last scene gave me inspiration to write a song called “Adopte un Zombie”. We had an excellent feedback from our audience, so I started to imagine other horror themed songs related to what I like : Jack The Ripper, Frankenstein, zombies, end of the world… I pay particular attention to match the music atmosphere with the lyrics. I tried to write love songs… and every time it ended strange or badly, like a murder or something else. Monster stories, that’s my thing.

Nobru: Don’t believe everything he says. He IS a lover. That’s a fact.

Was it Iron Maiden?

Le Mago: «On aime notre pote Iron» But Iron Maiden has never been a starting point for writing. While Rammstein, Alice Cooper, Tim Burton or Rob Zombie, much more.

How do you describe your own sound? Rock’n Monsters?

Le Mago: During many years, people called us “The Zombies” because it was the main topic of many of our songs. Telling that we’re doing Zombie Rock made the public curious. But we’re still using it ! In fact, if we compare ourselves to others, we’re doing Alternative Rock, Horror Rock. Today the zombie remains our emblem, but we have been diversifying themes, so today we’re more into saying Monster Rock… if it exists.

Nobru: I think it exists as much as Santa brings me gift every Christmas.

You sing in French, with now and then a little pinch in English, is that on purpose?

Le Mago: It’s a really bad idea for me to sing in English ! And I write more instinctively in French. Maybe it will change someday, but for now it’s what makes our difference. Sometimes you can hear a few words in English, for example “Deathtrain”, which is a lot better than singing “Le train de la Mort”.

Nobru: Actually, you’re saying both in that song… dickhead.

You never tried out a song in English?

Le Mago: Well. Yes. It was pretty bad. I wrote a song called “Time for Chaos” during that particular period where we were doing everything and anything and where singing was still a whole new world, a whole new concept for me…

Le Mago: He will ruin the whole interview.

Six pied sous Terre (six feet under) is my favorite track, is it that hard to find some peace or was it just your fantasy on the loose and started thinking about a monster who wants some rest?

Le Mago: A bit of both. Our songs often portray monsters and their capacity to do silly things. I wanted to make an homage to the survivors and their everyday life in a zombie apocalypse. At the end, it’s not so different as our daily life… “There is always a guy to fuck with you” whatever, whenever. It helps setting up an atmosphere: on one hand you’ve got monsters, on the other one you’ve got miserable humans getting beaten. Even if it is said with humor, it’s a kind of metaphor for life.

You are not afraid of cool word games like in the title track Franck Einstein, does it come easy?

Le Mago: I should get a degree for my bad word games, spoonerism and shitty jokes… But I’m afraid it comes very naturally, (un)fortunately ! I get rid of some in my writing process between the first and the final version of a song, because it’s often very very very bad.

What are your most favorite monster movies?

Le Mago: Very hardly to say, there are a dozen. Night of the Living Dead ? Frankenstein ? Godzilla ? Gremlins ? Alien ? I think I’m unable to choose…

Nobru: Personally, I’m a really huge fan of Alien. It’s the ultimate monster which I’m in love with since my childhood. Please marry me. Ghostbusters is also a big thing, and could be related a lot to what we’re doing with MAGOYOND.

Soon you’ll play at Trolls et Légendes, during the first day: the most festive day, how does it feel?

Le Mago: It’s been a long time I’m excited about the Trolls & Légendes line-up every fucking year, and the Belgian public is absolutely awesome. We will be playing along with the Naheulband - I mean the same night - who are very good friends of us… You can be sure that we’re going to go silly things together on stage ! Can’t wait !

How does a show like your look like? Can we expect to see some monsters on stage?

Le Mago: Our make-up artists Blush & Crush will be in charge to scrach our faces in a classy way. A MAGOYOND show can include fire, confetti, magic, bad joke and monsters when we have enough time and space to make a complete show. For this occasion, we still don’t know what we will be able to do… but be sure it will be EPIC, whatever happens !

Nobru: I heard that a monster called “Le Magro” will be there. It’s the evil side of Le Mago, in a fat way...

Will you bring on some nice zombies?

Le Mago: Zombies will be in the crowd, whatever they want it or not !

The Dolmen and Naheulbeuk will play on the same day as you, do have a question or a message for them?

Le Mago: We will probably do some silly things with the Naheulband. It’s a real honor to perform with all those mains actors of the actual medieval music scene. We’re just hoping that The Dolmen won’t lock us up in a Menhir sanctuary or other big and heavy stones because we wake up the dead. This kind of things were not very popular at that time…

I could watch the cool clip Zone Zero, it tastes as if you can deliver more of pearls like this and reach out to a larger audience, how did it all got worked out?

Le Mago: Thanks a lot ! We are very lucky because within the band, we almost have all the profiles for a creative team : Jekyll is a developer, Vito is a director of photography, Aspic is a professional musician and Nobru and myself are Artistic Directors. Everybody tries a bit of everything. We are surrounded by qualified people, it helps us building projects in a fast process and doing things in a good way. We wanted to make a video clip since a few months to lay the foundations of our universe and Zone Zero was a good opportunity to take. It took time to make choices but we’re satisfied with it for a 100% homemade video clip !

Will you deliver soon new tracks?

Le Mago: We are seriously thinking about a new LP. We keep composing continuously and we will probably release new songs on the internet before releasing a new LP. There is always new things to come with us: by the end of 2016 we released ZNAKE, a retro video game to be played on your web browser with an original sound track of our songs… but in 8bit style ! Who knows what 2017 will bring us?

What will 2017 bring us with Magoyond?

Le Mago: Today, everything is about visibility. We have to zombie-fy more and more people, perform more (and further) so that MAGOYOND could federate even more, in music. We’ve got projects with the Naheulband, negotiating concert dates, songs and video clips… No time to get bored!

Is there something you want to talk about, something I didn’t dare to ask, to close this interview?

Le Mago: As you can see, we have a particular relation with the Naheulband. I started doing nonsense things on the internet thanks to Pen of Chaos and his famous Donjon de Naheulbeuk. I joined the band since more than a year now, which is a very interesting experience for me. When Ghislain recommended us to do their opening at Trolls & Légendes, we went totally crazy. I personally owe them a lot and I’m very proud to make zombie able to walk on stage a reality today.

Nobru: Thank you very much Filip and see you in the pit!

Thx a lot and let’s keep up the good work of all the volunteers and Trolls et Légendes lovers!