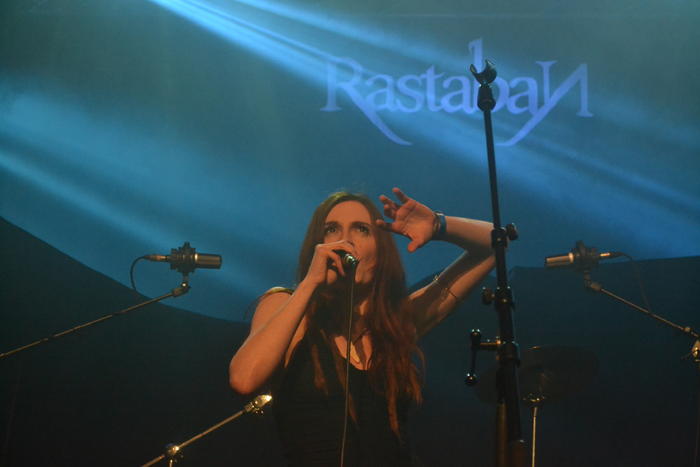 Interview with Rastaban, thanks to the fans and special party at Trolls et Légendes!

Rastaban is a great band! I discovered them at my first edition of Trolls et Légendes and have seen them growing and playing more and more gigs! Their folk tribe creates on stage a real party and each gig has been something special and all have been moments that will stay in my heart. The artists are real and warm people with a great heart and passion for their music. Their drummer, Mich, was so kind to answer to my questions, so here goes my third interview with them:

I interviewed you last time two years ago, since then you played in the UK, Germany,… Can you look back over these years and tell us about it all?

Even if 2016 was a relatively quiet year on a musical level due to our singer Marine's pregnancy, we can say that since the last interview with you, a lot happened for us in a very positive way. You already mentioned the gigs played in countries where we never performed before, which were really great. Our concert in Glastonbury (UK) with The Dolmen was a great experience, the amazing way the audience welcomed us in this sold-out venue was a complete surprise for us. We also played our very first concert in Germany for MPS in December 2016 in Dortmund, with a great feedback from the audience too.

We also had the great opportunity to work with a professional crew from the IAD, the institution who is forming among others the movie directors and sound engineers here in Wallonia. Diane, our video director, produced a couple of amazingly evocative music videos for us, and recorded a whole concert with a huge crew and multiple cameras in one of the greatest venues of our region. You can see the result of this live recording in several videos on our Facebook page and YouTube channel.

Besides that, we played several other concerts in Belgium and the Netherlands, with always the same pleasure and the same great interaction with the audience. The stage remains the place where our music is really feeling at "home".

You also played on the same stage as Irfan, was that a dream come true?

For years, I was waiting to get the opportunity to see Irfan perform in a cozy and intimate venue like a theater. We shared the stage with them several times at Castlefest, always an amazing and mesmerizing experience, but a festival is not always providing the best environment for such an ethereal music as theirs. When they contacted us to see if it would be possible to organize a gig together in Belgium, I immediately thought that the Espace Duesberg in Verviers, a very cozy venue with a very good acoustic where we've already played, would be the perfect place for it. They accepted to book us, and it was definitely one of the best evenings of the last years. Beside the fact that sharing the stage with these close friends is a real pleasure, the best part was to be able to enjoy their music in the best conditions possible.

You recently played at the winter edition of the Castlefest. I know from the past editions that you also love this festival, will you return for the summer edition?What’s the difference in feel and setting between the winter and summer edition?

We didn't really know what to expect as it was our very first gig at the Winter edition of the festival, but we really enjoyed it. It's difficult to compare both events, the conditions and the scales are much too different, but despite the differences we could definitely feel the same spirit and energy around. The fact that the winter edition is much smaller isn't making it less enjoyable, the atmosphere remains great, and it still felt for us as a big family gathering with many friends and familiar faces everywhere.

It's a bit too soon to say if we'll be present at the summer edition for 2017, but we of course hope so.

How come you are still not on Spotify?

Because we are lazy people who don't care about these things. (laughs)

But we're thinking about it, there will probably be some changes on these aspects soon. Well, relatively soon.

Mich: last time you told me you never missed any edition of Trolls et Légendes and now they've asked you back, how does it feel?

Well, it feels great. Trolls & Légendes remains on the top of my stage experiences, the audience is just amazing, the energy, the crew, everything. Being back there with a complete different concept is very exciting.

I feel like Rastaban gets bigger, better and louder?

Thank you for the compliment. I don't know if we really get bigger, we're still a relatively confidential band, we don't have a huge potential to grow because we're all busy with other projects and our own private and professional life, but we're still enjoying this crazy adventure very much. And on Trolls & Légendes this year, we'll definitely get louder, for sure.

The replugged version, how will it sound and look like?

It won't look much different than a normal Rastaban gig on visual aspects. We've always focused on the music and the energy on stage and never really took the time to develop the visual aspects of our performances, and it will also be the case this time. But giving a more rock-metal sound to our songs will definitely be something special on musical level. As we all started our activities as musicians in this more rough genres, it's really something special for us all. You can feel the excitement during the rehearsals when we're preparing this special gig.

Can we expect some guests? Karolina joined you 2 years ago and will be on stage too, might that be a possibility?

We don't plan to have guests for this edition so far, but we'll have an extra musician on stage during the whole concert. One of the best bass players of our region, who is active in different bands from metal to jazz will bring an extra touch to our sound.

You also have a good relationship with The Dolmen, they will also perform in Mons, again: I feel like it would be great to do something together (in Mons or in the studio)?

Yes, we have a really good contact with The Dolmen, it's always a pleasure to see them. I don't think that something together will be possible this time at Trolls et Légendes, as we're not playing on the same day, but who knows maybe in the future?

Headliner this time will be Korpiklaani, have you ever met them? Any message or an important question for them?

We never met them, and actually never saw them live, but it was great news to see that they were the headliner on Saturday this year. We're really looking forward to see their gig, as it's the perfect party music you can imagine for a festival like Trolls & Légendes. We'll definitely enjoy their concert and the energy they are able to share.

Do you think you can come back one last time, as headliner, next time?

Who knows what the future will bring? A lot can happen in two years’ time. Everything is possible.

Your CD Aurora is almost sold out, feels great no? For sure in these times of illegal copying, streaming … Is there a new album coming up? A new video?

We're lucky to be active in a music scene where the fans respect your music and like to purchase your physical albums. Aurora will become a collector's item, as we won't reprint it. It's a bit like the first chapter of the band getting closed, making space for new things. We started to work on new material for an upcoming album, but slowly. It won't probably be for this year, considering the time needed and all our other obligations.

It's going very well with La Horde. We've released a new album last year and a new music video a couple of months ago. It's a great experience that I enjoy very much. I've learned a lot by playing with them, and it's a real pleasure to be on stage with this bunch of crazy friends.

What will 2017 bring for you and Rastaban? Is there like a last dream? Perform in Canada?

We already have several gigs planned for this year. We'll normally play our first gig in France in April, but it still has to be definitely confirmed. We also started to work on new material as I mentioned before, but it will take time. Private life, kids, jobs, other bands... It's not always easy to find time to develop our activities, but we're as always letting things happen without being too pushy. If what we have to share is still worth it, Life will provide the opportunities.

Is there a last thing you want to talk about before closing this interview?

I'll just take the opportunity to thank all the people who are supporting us, some of them since the very beginning of Rastaban. It's been our 5th anniversary a couple of weeks ago, and it has been made possible by the support of the people who felt touched by our music, come to our gigs and promote our music around. For a small independent band like us, their help is much more important than they could imagine.

Thx a lot and let’s keep up the good work of all the volunteers and Trolls et Légendes lovers!