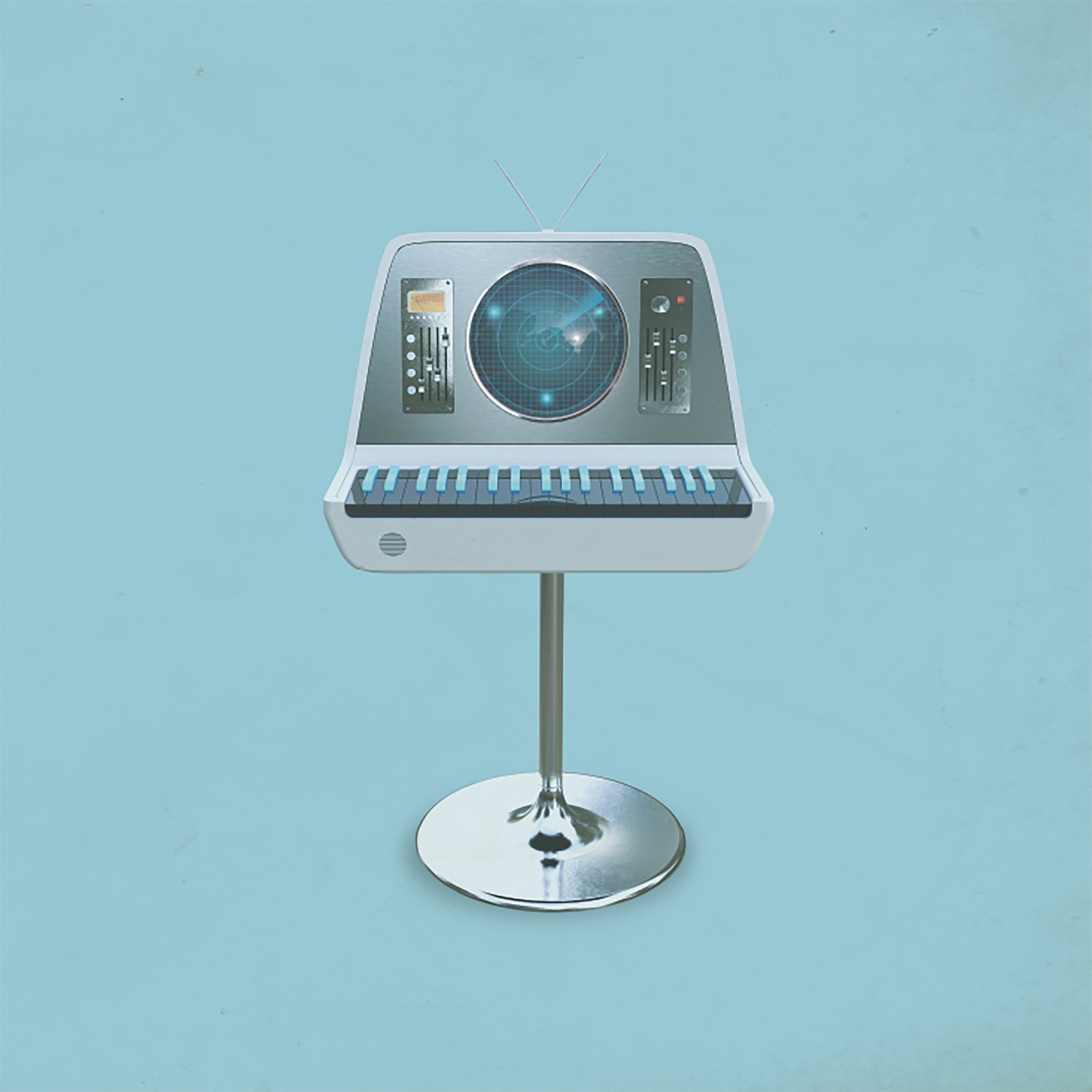 Enter Shikari: "It was about community"

A new era is rapidly approaching with the release of The Spark tomorrow. We therefore take a moment to look back on Enter Shikari’s time leading up to the recording of their fifth studio album.

The Take To The Skies-anniversary tour this year allowed us to travel through time. It has been 10 years since the release of St Albans’ favourite uncategorizable band’s debut album, which would lay out the foundations for the vastly different music that was about to emerge from this quartet. As much as their music may have evolved over the years, Enter Shikari’s on-stage antics and ethical awareness know no bounds still. We caught up with vocalist Rou Reynolds and drummer Rob Rolfe before their show in Utrecht this month, to chat about touring, the debut album that rocketed their career, and what it means to let your voice be heard.

Only last year, as they will again in November of this year, Enter Shikari were playing arenas throughout the UK. This tour has them playing much smaller venues, mostly in cities never visited before – what is it like?

Rolfe: If we do a European tour it’s usually the Paris, the Amsterdam, the Berlin - the big cities that get all the shows. It’s nice to do the smaller ones, we enjoy getting out into the country – often all we see on tour is the motorways in between the cities, so it’s nice to explore the small and beautiful towns, with their winding streets and friendly people. We’ll make the people from the bigger cities travel for once! They’re spoiled for choice when it comes to shows.

Do these smaller sized-venues make the touring process more manageable?

Reynolds: For our crew, probably. But usually, it’s actually the bigger the venues, the easier it gets – there’s just so much space to relax.

Rolfe: In the smaller venues backstage everyone’s tripping up over each other.

Rolfe: And the small shows get sweaty. Really sweaty.

Reynolds: These audiences go nuts though. They really go the extra mile.

The Take To The Skies anniversary tour started in March of this year, so you’ve had plenty of time to get used to playing the songs that launched your career – does it feel any different from when you played them 10 years ago?

Reynolds: It’s hard to remember what it was like... Although I found it surprisingly easy to get back into that mindset and play the songs, hopefully with as much energy and passion as we did back in the day. It’s felt quite natural, really.

Were there any songs you’d forgotten how to play?

Reynolds: Oh, I didn’t remember any of them! And then there’s ‘Today Won’t Go Down In History’, the one track we never even played before this tour. Never even practiced! That was interesting, we had to learn that like it was a new song.

But now that you’ve gotten the hang of it - do you think your playing live has evolved over the years?

Rolfe: I hope so.

Reynolds: My voice is certainly much stronger than it was back when we recorded this first album.

Rolfe: We’ve changed our on-stage personas I suppose. Whereas before, we were these young, teen angst kids.. The aggression was coming out for the first time and we were really sort of exploring and going wild with it. Whereas now, we’re – I don’t really want to say veterans – of the touring circuit. We know how to put on a solid show and it doesn’t necessarily need to just be as wild as what we used to do, in order to put on a good show. I don’t think we ever thought about how well we sung or played our instruments. Rather, it was just about flashing around and being as explosive as possible! But now, especially since the shows are bigger, there’s more production, more thought gone into it. There is a sort of rounded product on stage, as opposed to just the experiment that it once was.

The crowds sure don’t seem to behave any less rowdy though?

The crowd has always played a major part in Enter Shikari performances. Audience participation is something the lads encourage in any way possible – Rou has even said about ‘Sorry You’re Not A Winner’ that the famous claps are just another way to include an audience in a performance. We saw them as similar to gang vocals, human pyramids, playing shows amongst the crowd - just another way to bring everyone closer together.

Do you claim to have invented the human pyramid?

Reynolds: There’s countries that have professional adult pyramid-forming-teams, with ten levels of people!

Rolfe: These people even do it standing on each other’s shoulders, not just on all fours.

So how did the pyramid end up at your shows?

Reynolds: We’re not a hardcore band, but we’re influenced a lot by that scene and we’ve been amongst those bands, friends, etcetera. There was a lot of violence at hardcore shows when we were coming up. That for me was the opposite of what hardcore and what punk was about. It was about community. The human pyramids was just one thing, meant to force everyone to work together, as we built something. That’s why we did it. 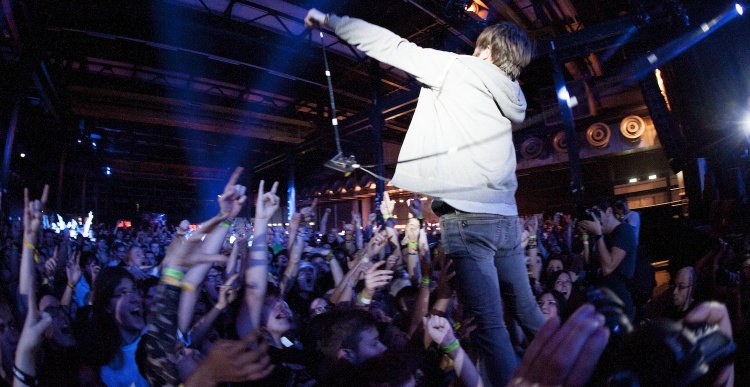 Unity and solidarity have always been values the band feels strongly about, not just at their shows, but in society as well. Outspoken as their lyrics may be in their own right, their social media efforts are put towards these greater causes as well – next to plenty of direct interaction with fans, like in the MySpace days that saw the emergence of Enter Shikari. Just a small peek at their Twitter shows them talking about the British general election, global warming, and many other noteworthy subjects.

How do you go about keeping up your social media channels?

Reynolds: The band accounts are really team effort, management and us.

Rolfe: Everyone has the account details and posts stuff. The posts out there that are non-band related, anything talking about world issues - we all have very similar views on the world, and we all agree. We can speak out as a group more or less. If any one of us sees an issue and wants to put it out, we have a pretty good understanding that we’re all behind it.

How important do you think it is for artists to have a say on current affairs?

Reynolds: If they’re comfortable with it, it’s cool. It’s just using your pedestal for something more than just art. I suppose that’s all part of art as well. I think it’s just something we’ve always felt was natural to do. Coming from a punk scene, that’s just what you did. That’s what music was for – a tool to unite us and to talk about affairs.

What is your response to people who comment on your posts saying they liked you better before you became so ‘political’?

Reynolds: We never weren’t political! They just didn’t realise it. Every decision we make really is a political decision. I usually don’t describe us as a political band. It’s just that I’m interested in social change, social design, social justice. I think a lot of these people don’t even actually disagree with anything we’re saying. They see the P-word and they just switch off. Many won’t even know why.

Judging from your lyrics, you’ve have always had quite a positive outlook on the nature of people. However, you have mentioned yourself that this is a naively optimistic position, and you often speak out against authority. Do you believe that it is in human nature to be good human beings?

Reynolds: I guess that capitalism allows the most ruthless, immoral people to get to the top. Because if you don’t care about anything apart from power, then that makes it easier for you to get power, really... Because you don’t care about fucking over your friends, or anyone. But I think in general, most people are alright. They’re just trying to get by in this life.

Rolfe: Just another confused soul in this topsy-turvy world. Like you and me, trying to make ends meet, make sense of it all.

And can anyone really say he doesn’t? Lucky for us, November will see the Shikari lads return to the highways of the UK and mainland Europe– catch them on tour this Fall with Lower Than Atlantis and Astroid Boys.