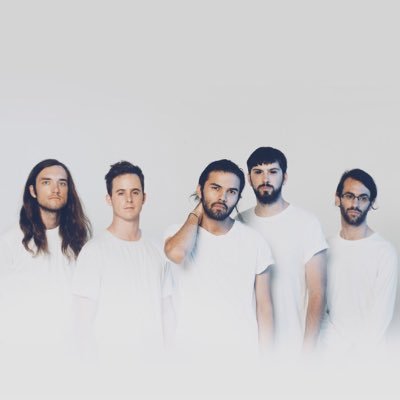 Northlane are an Australian metalcore band with technically complex, yet some of the heaviest riffs around in metalcore today. After forming in Sydney in 2009, the group has seen some changes in its style and line-up. Currently, the band comprises guitarists Jon Deiley and Josh Smith, bassist Alex Milovic, drummer Nic Pettersen and their newest addition, vocalist Marcus Bridge.

It’s only a little over three years ago that Northlane released Rot, their first song with Marcus on vocals. Since then, they’ve released a #1 album (Node) and this March, their latest release Mesmer. After passing through Belgium just last week, it’s been announced they’ll also be joining next year’s Graspop Metal Meeting line-up. Time for a chat with the band!

After plenty of festival shows this summer and a full Europe tour this month, what is your impression of the scene here? Does it differ a lot from that in Australia?

Milovic: I do think the European scene is a lot different than Australia’s.

Smith: I find the European crowds need a lot more convincing than Australian crowds. You have to work really hard, or they won’t give you much interest at all. It took us a lot of time playing in Europe, coming back lots of times, for people to start getting into our band. It makes it really rewarding too. But the crowds are also very different everywhere within Europe. I really enjoy playing to Belgian crowds, these tend to be a little hot-hearted. That’s fine, everyone’s different.

How do you keep up the intense touring cycle?

Milovic: We try having a few days off in between shows, get a chance to rinse and repeat. I guess everyone has their own little ways of coping with being on the road and doing so many shows every day.

What do you do to unwind?

Smith: Don’t drink too much beer. Try and eat well. Some of us do sports. It’s very easy to lose your mind when you’re with the same people all the time. You’re all uncomfortable, you’re tired – but the more we do it, the better we get at managing ourselves and taking care of ourselves.

On March 24, Northlane released Mesmer without warning or release-date.

How did the album come about?

Smith: With Mesmer, we knew exactly what album we wanted to do. We’d started writing pretty soon after Node came out, and started recording when we had a week of during last year’s festival season. This was at Ghost City Recordings in Bavaria, this really beautiful spot: a monastery in a tiny little town, an awesome studio. We spent that week deciding exactly what the new record was going to be, from the ideas we’d thought up until then.

I think, by then, Marcus was 100% confident and comfortable in the band too. While we did Node he had only just joined. It was a difficult time for us. Our producer David Bendeth (Paramore, Breaking Benjamin, In Flames) really pushed Marcus’s limits until he got every muscle of emotion out of him.

The songs on Mesmer are quire emotional.. A lot of unfortunate things happened to us in the two years we were writing the album, which made for what it is. We spent a lot of time writing and making the album exactly what we wanted it to sound like, making the best of that difficult situation and telling our story.

"I think every artist is entitled to do whatever they want to do with their position. I feel like I have been gifted with a very special opportunity and my conscience tells me that I have to use that platform for good."

The lyrics on Mesmer range from very personal to larger themes.

Smith: When you’re talking about things that happened to us, people we lost and stuff like that - it’s been fairly more direct than before. There’s definitely a theme of loss that goes through the whole record. I think that’s quite easy to find.

Milovic: The deliverance on Marcus’ part makes it a little easier for the crowd or the audience to grasp. In Mesmer, he just sounds more confident in his decision in the band, which I feel like will then strongly translate the message. Some of the songs or concepts on Node may have taken a while for people to understand, because maybe he wasn’t too sure of his confidence. It’s been a big learning curve for Marcus.

Smith: I think on Node, there was a lot more metaphor in the writing too. On Mesmer, there’s stuff that I wanted to be more direct. It’s a bit of both direct and indirect,  somewhat more straightforward and easy to understand. Instead of using the metaphors to disguise what the meaning was, so people could take their own meaning from them, it’s now a bit of both. There’s some songs on it that do with more metaphor, and in certain instances it’s good, ‘cause people might attach their own meaning to the song, in a different way to how it was written, which is great. Some of the most powerful songs to me, are like that. I want to attach my own meaning to them.

Milovic: Most important for all of us is to make a statement we all believe in, for the band to be convicted about what the lyrics are about. To really stand behind what we’re saying, and why.

You’re quite outspoken in that sense, on stage as well as on social media. Do you consider it an obligation for artists to speak out?

Smith: This is a good question. I think every artist is entitled to do whatever they want to do with their position. I feel like I have been gifted with a very special opportunity and my conscience tells me that I have to use that platform for good. I have to communicate a positive message and have a positive impact. I wish to use the position that I have, that we all have, to do something worthwhile. There is enough negativity in the world. And I do  think it’s important to shed a light on that, I do – but I think using your platform for good is extremely important.

Actually, so is being communicatable with your fans. In the end, they were the people that gave you this opportunity and this position. They need to know that you are a human, a person, just like them. If this is what they want to do as well then – if you could achieve it, they could achieve it too. I think it’s very, very important. All of the artists that I respect have done exactly the same. I hope to inspire others, like others inspire me.

Milovic: Sometimes when you’re in the crowd watching a band, you’ll have someone come up to you and go, “Why are you standing here? You should be up there!” Well, I really prefer watching the band from down here. I’m like you. There is no difference between me and any other guy in the crowd. We had that message given to us by the people that we look up to and it gave us the drive to want to make a name for ourselves. We wish to pass on that kind of (I hate to say the word) ‘inspiration’. Seeing someone’s face when you give them a setlist and they go “this is the best thing that’s happened to me all week!” I can almost imagine that guy headlining a festival in a couple of years.

Smith: I think the number one lesson I learned from being part of a local hardcore community where all of us used to go to shows, is that being humble is one of the most important aspects of life.