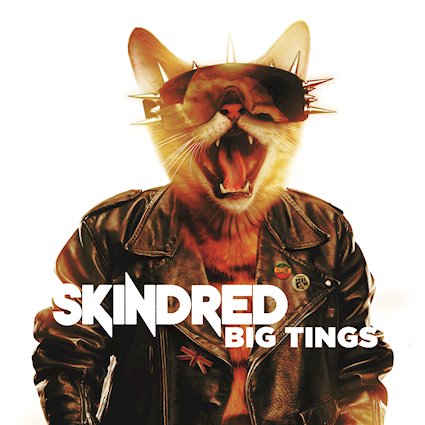 Interview: Skindred -" Every day in this world is a gift and its stupid to take anything for granted"

Skindred exists since 1998. That's about 20 years now? What is the biggest change over all those years?

We’ve all grown up and been through so many changes in our personal lives for starters. I was a kid who I joined this band 18 years ago, I’m (sort of) an adult now. I’ve been playing onstage and making music for my entire adult life which is pretty amazing. The band has evolved musically over that time too, we’ve always tried to improve on our previous efforts and keep people guessing, that keeps things exciting for me. We survived many trends and scenes and came out unscathed, all with the same line up. Which is pretty rare these days.

Skindred is definitely a heavier band than Dub War, theres a common thread that Benji was the singer in that band. I was familiar with the band but Skindred were more my thing for sure. I saw Skindred live a couple of times before I joined and they blew me away!

What are you most happy about, what would you have done in a different way, something you feel sorry about? The good and bad things about 20 years 'on the route'.

I’m very happy to be still making music that moves people, touring the world and diversifying my portfolio. I met my wife through doing this so I’m very thankful for that. Like anyone with a life behind them I’ve made plenty of mistakes but I try not to dwell on that stuff, life is too short. I guess if anything there might have been times when I spectated more than got involved with things on the road or in the studio, these days I am a lot more integral. It’s one of those “I wish I knew then what I know now” things. I think trying to enjoy the moment you’re in rather than stress about what’s coming next is good advice in life generally.

There are many ways to describe your music. Wikipedia calls it a mix between alternative rock, reggae, heavy metal and punkrock, with some elements from dancehall, jungle, ska, hip hop, drum and bass, dubstep. How would you describe your music yourself?

I guess rock first and foremost, there are flavours of all the above - Wikipedia has got it pretty spot on! As time goes by we add or remove certain elements, it really depends song by song, and we never have a massive agenda with that stuff. It just sort of happens. We get together and the music we make just sort of takes shape; we are 4 very different people with different influences and passions musically, it’s not like we’re a straight up punk rock or metal band who only likes one type of music. We draw from a wide pool of influence.

You guys are going to do a UK tour and you will be playing on some festivals. I also saw you will play at a festival in Mexico/South America. Have you ever played there and if so, how different is it compared with playing in the USA and/or Europe?

Yes we’re starting our UK tour today as it happens, its the biggest shows we’ve ever played in the UK so I’m very excited to drop some new tunes and some Skindred classics. We’ve never been to Mexico as a band, I can’t wait! My perception is that the crowds are as raucous and intense as anywhere else we’ve been. I have a hunch that Latin America is itching to have Skindred play live, I hope its the start of a beautiful relationship.

You also will be coming back to Belgium to play at the Graspop Metal Meeting once again. You played there two years ago as well when I’m correct. Do you like this festival and are there other fests in the Netherlands or Belgium you still wanna play…?

I love all the European festivals, we get treated very well in Europe so we’re always keen to get back there. The crowds are insane and you also get to watch a ton of badass bands - for free! Its a pretty sweet deal. We’ve done a bunch of festivals in NL & BE also, I think Pukkelpop was brilliant for us, Lowlands was incredible, Dour Festival was amazing. I wanna go back to them all!

I wonder. Do you find touring harder, as the bands get bigger, or is it more enjoyable, the bigger you get? And what do you think is harder: playing at festivals or playing in clubs or venues?

We’re lucky to be able to do both, I love getting to headline because its our show and we make the rules. You get to play more, drop some obscure stuff, theres a confidence because you know you’re preaching to the converted. But Festivals keep you on your toes, you get an opportunity to be inspired by other bands’ craft and you get to steal other band’s fans! We cut our teeth playing in front of festival crowds all around the world and we love it.

The band is having a reputation of very High-Energy and involving live shows. Even after all these years. The band also won several awards for all this. Where does all that energy keeps coming from you think?

I think we all love what we do first and foremost, I can’t really imagine standing still on stage, I like to shake my tail feather as much as possible. Benji’s a fairly relentless and uncompromising frontman - if one person in 20,000 isn’t getting into the show then he’s singling them out and forcing them to get involved. The music’s pretty pumping and we really care about what we put out live, we work hard on our stagecraft as it’s our currency. Again its just something we do the way we do it. It’s just sort of happened naturally and people really react to it.

My diplomatic response is no! There are a couple of places that are a drag but I’m not gonna name names. I love to travel and even in the sketchier corners of the universe, we always have a good time and there are always stories that come out of those situations. Life’s a journey and you have to take the rough with the smooth! Bottom line is we are fortunate to be able to travel and see the world, so I love to take it all in and make the best of it. There’s lots of places we still haven’t been, and I can’t wait to see them all. I wanna go everywhere!

After all these years, are you not afraid to start playing too much on routine, and thereby loose the grip with spontaneity?

We have an element of controlled chaos on stage, theres an element of spontaneity that mainly comes from Benji. We like to know what we’re doing because it makes for a more pro show and a better experience for us. We walk a line between knowing what’s coming next and being plunged into complete uncertainty and the unexpected! I like to be rehearsed and practiced but theres an element of winging it too sometimes. We’re not robots we’re humans after all. I find the best shows have a bit of randomness but we are well rehearsed with the music.

End of April there was a new album coming out. What can we expect? Going in other ways, or in extensions of your previous record?

It’s an evolution for sure, there are some big ass tunes on this album - its called Big Tings for fuck’s sake! We couldn’t call the album that and not deliver some seriously big choruses and riffs for our fans. I’m not going to give too much away, you’ll have to listen for yourselves! But you can expect some soaring highs and big big tunes for sure. I can’t wait to take this record around the world its going to be a lot of fun.

What are your personal expectations of this new record anyway?

I try to have none. Every day in this world is a gift and its stupid to take anything for granted. I’d love it to be well received of course, but I am fully prepared for the journey ahead.

Also the way of making records changed through the years. From analog to digital. What do you prefer, analog or digital? Also the way musicfans deal with buying music has changed a lot. People rather download than buy a record. What is your opinion about this?

We roll with the punches of technology, you have to embrace every element that helps you create or distribute. I recorded a ton of backing vocals in a pub and my spare room for Big Tings. I couldn’t have done that 20 years ago. The same goes for releasing music, you have to work with what you have in front of you and embrace the change. Its the only way to evolve and stay current.

Let's talk a bit about the future. How do you see your personal future over, let's say, another 20 years?

Who knows. All I can hope for is a longer beard, I hope it turns grey and completes my destiny of looking like a badass wizard! Musically I’ll always have my guitar and I hope to be happy and healthy and playing a lot. There is still a lot of of things I’d like to do with life, both inside & outside of music.

And how do you see the future for Skindred?

Apart from the immediate future with touring and festival plans, it’s hard to say! Talk to me in 2 years after we’ve brought this album everywhere. It could be the start of something new, it could be the last thing we ever do. Like I said every day is a gift so I can’t take anything for granted. You have to make the moment count and I plan on doing that.

How does it feel to be an inspiration for other bands?

It’s kind of weird, we do what we do for ourselves first and foremost, when it escapes your little bubble and affects very discerning artists or people who you would never thing would be into it, its a big compliment. We have all different kinds of artists and bands tell us they love what we do, I’m constantly grateful for the praise and encouragement. Thank you!

I think this is my last question. Is there a message you have for our readers?

Thanks for supporting us and being into the band and what we do! Please check out Big Tings and even if you think you know what we’re all about, please come check us out with an open mind and your dancing shoes. I hope to see you all out there down the trail sometime. Lets do this!

Thank you very much for this interview!