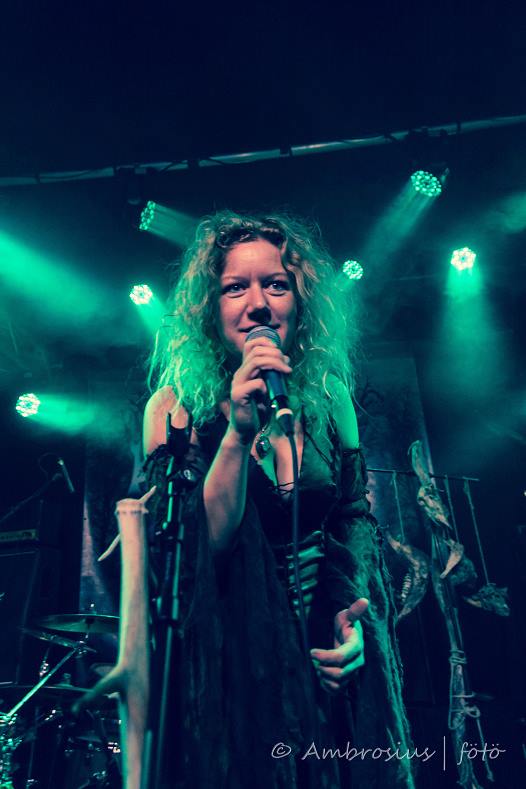 interview with Nanna Barslev about her solo project

Nanna Solveig Barslev goes on with her life, after Huldre, Asynje, Gny, Aettir ... she launches a first solo single and video! From now on it will be Nanna Barslev! We unveil some of the details for you!

It has been a while since we last saw each other, do you remember where and when it was (and why)?

What happened since then?

I have been playing a lot of different concerts and recorded cds with both Asynje and Huldre. I started a doom folk band Ættir and now the solo project.

One of the few bands I haven’t seen yet is Aettir. Can you tell something about it?

Lasse the guitarplayer from Huldre and I started a melodic doomie folky gothic metal band last year haha I dont know the songs can fit in many genre boxes I think. We started to make some songs and later we asked the Saturnus drummer Henrik Glass, bass player Tor and cellist Veronika to join us.

We have just recorded an EP at the world famous danish studio Sweet Silence with producer Flemming Rasmussen ( Metallica producer). We are really looking forward to release it later this year.

Very recently you decided to take the plug out of Huldre, why?

Things change and not everything lasts.

Was it hard to take the decision?

Yes it was a very hard decision and a long process.

Did you manage to see the Danish series called Jordskott? Is there any resemblance to Huldre (the story, the tree, ...)?

No I haven't seen the series, I think it is from Sweden and I dont think it has anything to do with Huldre

You are now launching a solo project. I read it was pretty hard to make a decision about the name as your family and first name all have a meaning in the Nordic history? Would you mind explaining it a bit? So in the end why did you decide on Nanna Barslev?

Ha.Ha yes I couldn't find out what I should call my soloproject. Lot of artists in my genre use a alias/artist names, but all my birhnames happen to be originated from old viking names and there are a different energy and meaning in the names as well.

I have been using different variations of my birth names during the years in different projects. Since the early 2000.

My birthnames Nanna and Solveig are both old viking godesses names, meaning battle and strengh, my lastname is Barslev and is and old vilage in Denmark. Larsen is a typical danish lastname in old times (the son or doughter of Lars)

I asked facebook friends and ended up with Nanna Barslev cause a lot of people already know me with that name and it's  hopefully easy to pronounce in other languages as well.

You recently launched a first single. It’s again with ancient (based) instruments?

Yes it is my first solo ever. It has taken me many years to find the courrage to make a solo album. I have always been lucky to play with talented musicians where I attributed with melodies and lyrics, but never dared to play ancient instruments myself (only drums).

On the solo single i play everything myself on an ancient instrument called Islandsk langspil, I recorded the sketches with a looppedal and different voices upon. Finally I recorded the single in Lava Studio with producer Christopher Juul from Heilung.

What are the lyrics about?

I made the melody for ”Skelfr Yggdrasil” a morning after I have had a very interesting symbolic night dream about finding an old key and lock from the viking age.

The mood in the melody is dark, sad and with a released feeling as well. I found out that the ragnarock part in the Elder Edda fitted well with my melody and pictures. It begins with the world collapsing and ends with a new beginning. The lyrics are in old nordic and have a heavy energy so it took some time to find the courage to sing them, but they fit well with the state of the world at the moment.

How was it to shoot the video?

It was very fun to shoot the video. When I made the song I already had the idea for a scene located at the old viking fortress Trelleborg, and I had a very fine collaboration with the fotografher Mark Thyrring.

Was it done close to your home?

I wanted to show some of the Danish viking history and the viking fortress Trelleborg is located in Slagelse at Sjælland so yes, close to home.

What else can we expect in the future?

I want to record a full album and play concerts at special places.

I already have the material and think I found my own style.The songs are very dreamy, both dark heavy and light in the same way and I hope people can relax when they listen to the songs.

The process for me is very important, enjoying every step of making the solo album. I also cooperate with people I know who work with shamanism, Witchcraft etc and some of the songs can be used for ceremonies.

How can people help you to realize it? Any last words?

Good question. I do all this on my own and have no label etc. Crowdfonding could be a solution so I can record a full album, but I hope a good solution appears haha. I feel a lot of support from friends, fans and people and hope they will help me sharing the music and spread the word, maybe come up with good ideas for concert locations.

Thanks a lot Filip for the very fine questions and for the interest in my music, hope to meet you soon again.

And for you who have listen to my single ”Skelfr Yggdrasil”, I hope you enjoy it. You can follow me at Nanna Barslev. Hope to meet you out there.