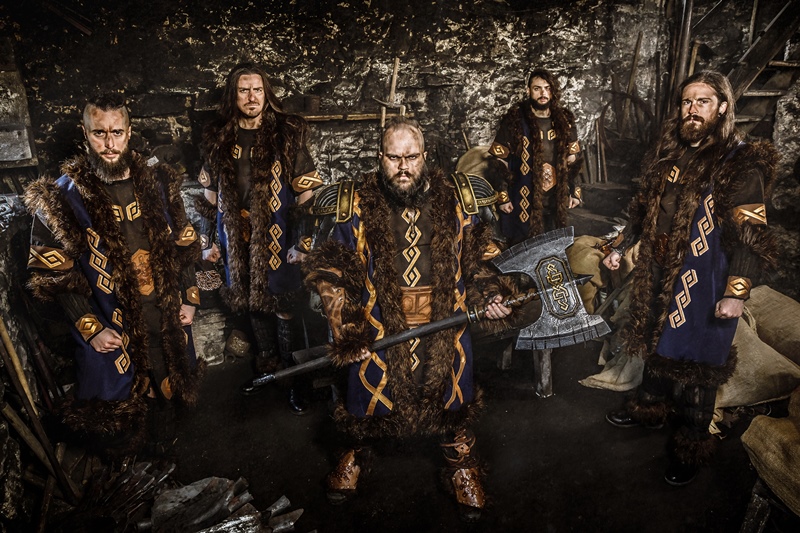 An interview with Francesco Cavalieri, singer of Wind Rose

I had the pleasure of reviewing the laterst Wind Rose album  "Wintersaga"  and I was really impressed. “Wintersaga” undoubtedly marks the great breakthrough of the Italian power metal quintet  Wind Rose with their masterful alchemistic mixture of easy sing along drinking and warrior songs and epic power metal.

I took the liberty to invite myself to the dwarves' kingdom for an audience with frontman and singer of Wind Rose, Francesco Cavalieri

Why did you chose the bandname Wind Rose? Does a wind rose have a special meaning to you? Are you perhaps meteorologists?

Wind Rose came out more than 10 years ago, was a nice name, easy to remember and it is also an instrument used on maps for navigation so it gave us a sense of freedom. But we are also meteorologists, so I predict that we'll bring metal rains and turbolences upon metal scene but in the future.

Is there a central message on “Wintersaga”?

Basically a winter novel; the return of the "Durin" to the home of all the dwarves, like the winter that come back and freeze everything. It could be seen like our entry in the world of music business hopefully :D

How important are the stories of J.J.R. Tolkien for the textwriting? Are there other authors that influence Wind Rose’s lyrical world?

The stories and the legends around the dwarves, and even Tolkien poetry, are the core of lyrics; I try to change the poetry to something more abstract than descriptive like him for musical purposes. Even other movies/books/myths/legends are inside our music, making everything more various and interesting.

What’s so fascinating about dwarves? How far do you identify yourselves with that (fictional) race? Do you believe dwarves once existed?

Believe that they once existed? You are talking with the King. Seriously, jokes apart, the dwarves in all the fantasy worlds are the ones with more hidden legends, secret underground realms, and more that humans don't know yet so it's always a discover when you get a walk inside the dwarfs world. This is fascinating. They are also loyal, mighty, greedy for glory, fame and gold like us! So it's match :D

In “King under the Mountain” you talk about sons of Aulë and sons of Durin. Who are they and who is the king under the mountain?

Giving a real answer to this question would take forever, but in quickest way: Aulë is the "mahal" (in Khuzdul "the maker") because he was the actual creator of this race. Durin was one of his children created at the dawn of Arda, but also became a title for the successors kings of the dwarves.

Can you tell us more about Durin’s Day? How important is that day for Wind Rose?

According with the Tolkien's lore, and with some elements added by me in for this album, the Durin's day is the threshold of winter, when during the night the 7 stars of the dwarves will align to awake the ancient king who will bring back the splendor to the halls by now dark and cold of the fallen realm.

Metaphorically, it speaks of the arrival of winter that disrupts an initial situation and brings about drastic changes, but it can also be linked to our arrival in the professional music market as the intentions are the same.

Your debut album is called “Shadows Over Lothadruin”? What is that about? Also, who are the Wardens of the West Wind on your second album?

Shadows Over Lothadruin was a concept album, LotR alike, more progressive than the stuff we do now. Wardens of the west wind were also us as storytellers, because that album encloses myths, legends and fantasy stories from many books.

I have a secret way to do choirs ( that I will never tell), but I admit that there are just 2 singers in all the parts that you here in our songs. So, it's funny to do them but also painful as long as I'm alone :D

“Wintersaga” also excels by many awesome orchestral sounds (strings, horns, flutes…). Are those all keyboardsounds or were live instruments used? Would you like to record or even perform with a real orchestra?

We had a professional violinist on this album, plus expensive plug-ins used in movies by renowned composers so it was a big improvement from the previous album to this one. Playing or recording with a real orchesta is one of our goals, but also very expensive so we will se in the future.

In the past you toured with bands like Eluveitie and Ensiferum? How was that experience? Did it affect your songwriting?

The experience is experience, so we can't say good or bad cause everything led us here. We watched and learned from the bigs and we got what was working on stage and what's not, so it affected our songwriting for sure.

You’re about to embark on a UK tour with Gloryhammer and Beast in Black. How excited are you about this tour?

We are excited to play in UK again, it's one of the countries where we are more loved so it will be a pleasure for us.

Later in January and February you will tour Europe with Gloryhammer and Nekrogoblikon. Will those shows be different from the UK tour?

It will be also a pleasure, we are hungry for fame and gold so we can't rest until we got everything.

You will play 1 concert in Belgium (in Antwerp) and 1 in the Netherlands (in Leiden). What can the Belgian and Dutch audience expect?

It depends, Dutch and Belgians are not crazy and messy but they still enjoy the shows so we respect this behavior :D