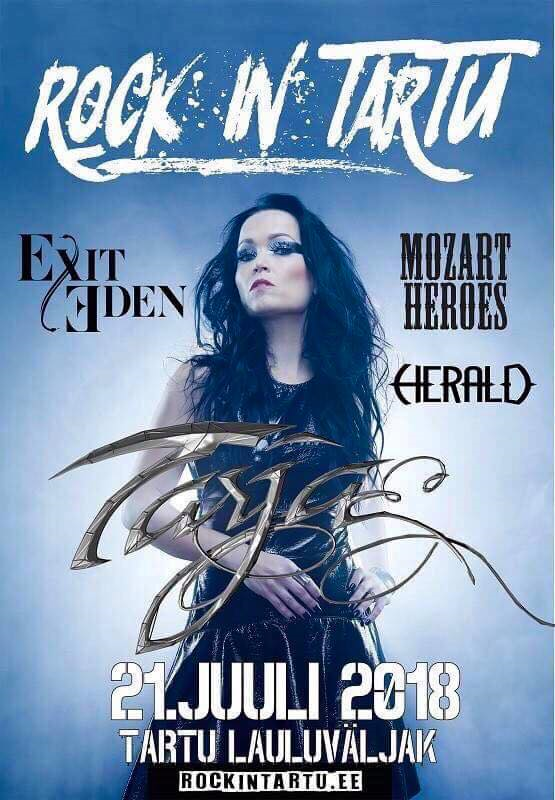 The biggest and hottest rock party in South Estonia, the festival - Rock In Tartu - is taking place at Tartu Song Festival Grounds. Very good performers, great and powerful stageperformers with powerful sound and lighting technique and special effects promise to create a fantastic concert. This is a festival worth visiting! This is the only opportunity in Estonia (and the Baltic states) to listen to and see performing live many world-famous bands whose only live performances will take place on Rock in Tartu stage!

Rock in Tartu brings us 4 bands, some to discover and some that will absolutely want you to see them. Do we have to tell you who Tarja is? Don’t think so! Exit Eden is a female fronted metal band that plays like a jukebox well known songs and hits turned into a metal version. Mozart Heroes does the same thing, except that here you get like classical versions. As opener we get local heroes who called themselves Herald and will play old school heavy metal in Estonian! Be there and don’t miss it!

Tartu is the city of students and known for great concerts. If you are a foreigner you can have a nice taste of Estonia and book a nice hotel in the city centre. There are a lot of nice and hip restaurants around. If inclined to have a spa break the day after the festival, there are several nice ones in the centre too. The locals are able to help you out in English and Estonia is really worth visiting.

The main act of Rock in Tartu is the world's most unique soprano: Tarja Turunen. Tarja's voice reaches over three octaves, therefore she can sing mezzo-soprano, contra-alto and coloratura soprano. Tarja started music studies at the age of 6, later she studied classical singing at the Academy of Sibelius. From 1996 to 2005, Tarja gave her emotional and powerful voice to Nightwish. To date, the metal band Nightwish and Tarja are associated, because Tarja's unique voice brought the band onto the big stage of the music world. We all know Tarja's world-famous songs: Nemo and Phantom of the Opera, or Wish I Had An Angel. Tarja and her band will perform their first and only live outdoors show in Estonia, so don’t mis it! She will play the good old hits (Phantom of the Opera, Nemo) and the newest songs.

Exit Eden (Amanda Somerville, Clémentine Delauney, Marina La Torraca and Anna Brunner) started playing together in July 2017, and their popularity has been rising fast and continuously. The band includes four beautiful ladies whose voices should make every music lover’s heart beat faster. In Tartu, the band will perform its only live show in the summer of 2018! Listen to some of their songs on Youtube and you understand that their performance will be shockingly good! You can also read our review of their first album (yes, we believe more will follow soon).

Mozart Heroes aka Chris and Phil are two Swiss composers who rock through the history of music with only a cello and two guitars. Even though the musicians met already during their studies of classical music in the conservatory, their paths crossed 10 years later. The desire of the musicians to get rid of the conventions, to be uncompromising and savage led them to the stage - Mozart Heroes was born. I would describe them as:a hardcore classic bands playing all the songs you know (AC/DC, Metallica, Ed Sheeran, Goldfrapp … It will be like a jukebox playing and thus a party for all, but in a classical version, so don’t miss them! Or you can describe them like this: Guitar player jumping in the air and the strings that break. Rock music riffs combined with epic film music and delicate classical motifs. Enjoy!

Herald is an Estonian Metal band and will be the opening act. Notice that they – just like Metsatöll – sing in Estonian. Their sound goes from heavy metal & rock to retro (from the good old days) with clean vocals and sharp guitars. They have released 3 albums and have a good live reputation. I’m pretty sure that the Estonians will be happy to see them on stage!