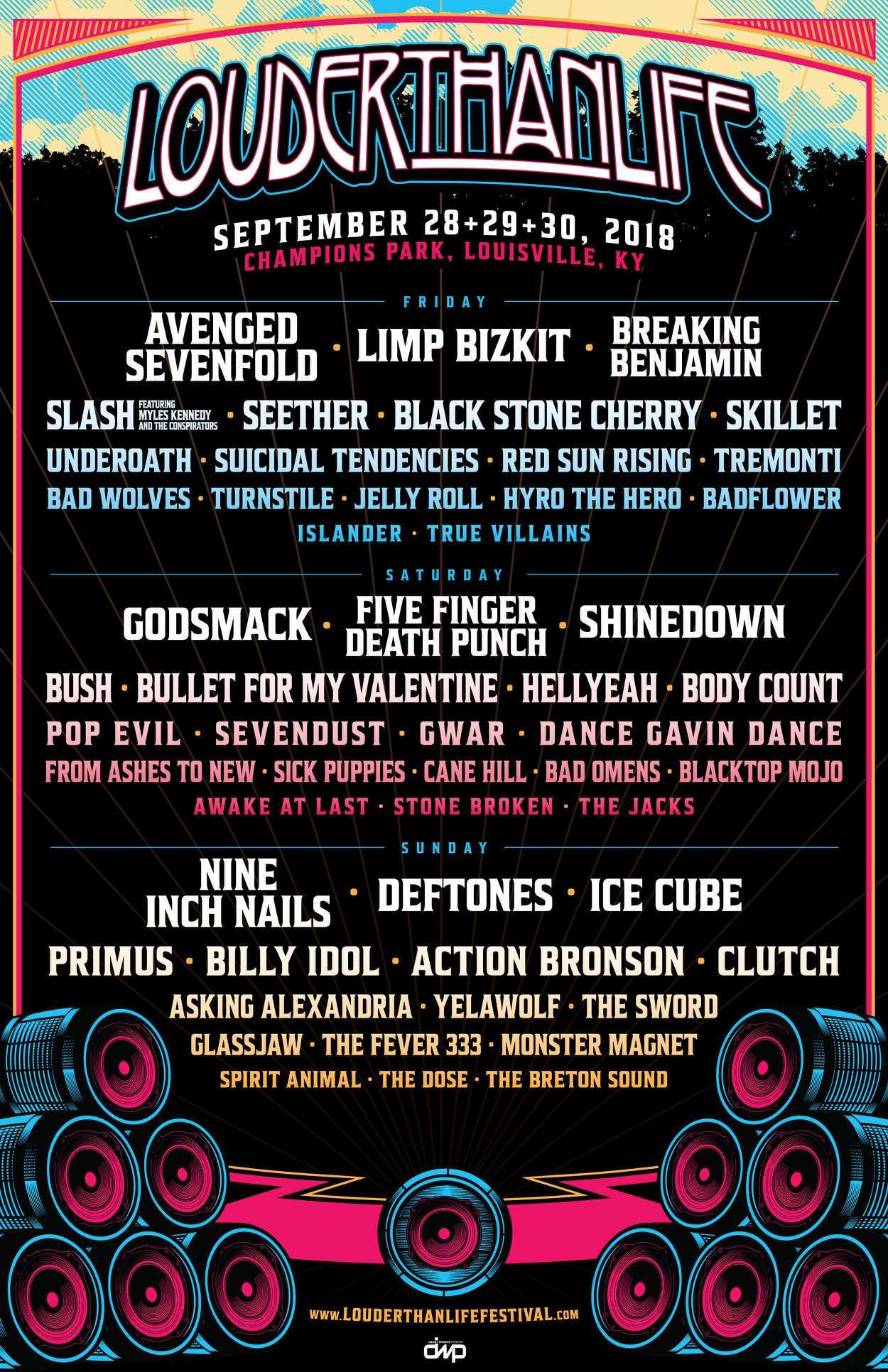 Louder Than Life features a selection of award-winning bourbons, whiskey, spirits, craft beer, and the best food Louisville has to offer, along with a powerful music lineup of rock legends and breaking talent performing on three stages. The festival celebrates the bourbon culture and culinary heritage of this unique American city.

The daily music lineup for Louder Than Life 2018 is as follows:

Festival producer Danny Wimmer, founder of Danny Wimmer Presents, explained, "I couldn't be prouder of what we have accomplished since the inception of the festival. In five years, Louder Than Life has become the largest rock 'n' roll whiskey festival in the world, and I see no better way to celebrate its 5th year than to close out the weekend with Nine Inch Nails and Ice Cube."

In addition to performances from top music artists, attendees at Louder Than Life will enjoy a variety of onsite food and beverage options celebrating the unique spirits and food of the Louisville region.

Attendees 21+ up can choose to visit Bourbon Worldpresented by the Louisville Courier Journal, and enjoy crafted cocktails at the exclusive Down The Rabbit Hole Speakeasy; sip fine wine at the Caduceus Wine Garden; or enjoy a local brew at the Craft Beer Bar. Other spirits can be enjoyed at the Heavy Tiki Bar presented by Jim Beam, or at the Jack Daniel's Experience for a "taste of Tennessee."

The Caduceus Wine Garden will highlight Caduceus Cellars and Merkin Vineyards, owned by Arizona resident Maynard James Keenan, co-founder of international recording acts Tool, A Perfect Circle, and Puscifer. Having already dove headfirst into this venture, Maynard found out from a distant relative that wine making is in his blood. His Great Grandfather, "Spirito" Marzo, had vineyards and made wine in Venaus, Italy, just North of Turino in Piemonte.

If patrons are looking for an elevated culinary experience, they are invited to take a tour of the newly added culinary food parties where guests can enjoy signature cocktails paired with gourmet plates. The "Lock and Key Pizza Parlor" will be presented by Larceny with signature selections from Spicy Pie Pizza. The "Southern Soul BBQ" presented by Maker's Mark will feature smoked delicacies from Boss Hog BBQ. The "Sip & Grill" presented by Southern Comfort will feature renowned Louisville chef Edward Lee of Whiskey Dry. Chef Lee will be offering a selection of his gourmet Whiskey Dryburgers paired with refreshing Southern Comfort cocktails.

For more information on Louder Than Life, visit: