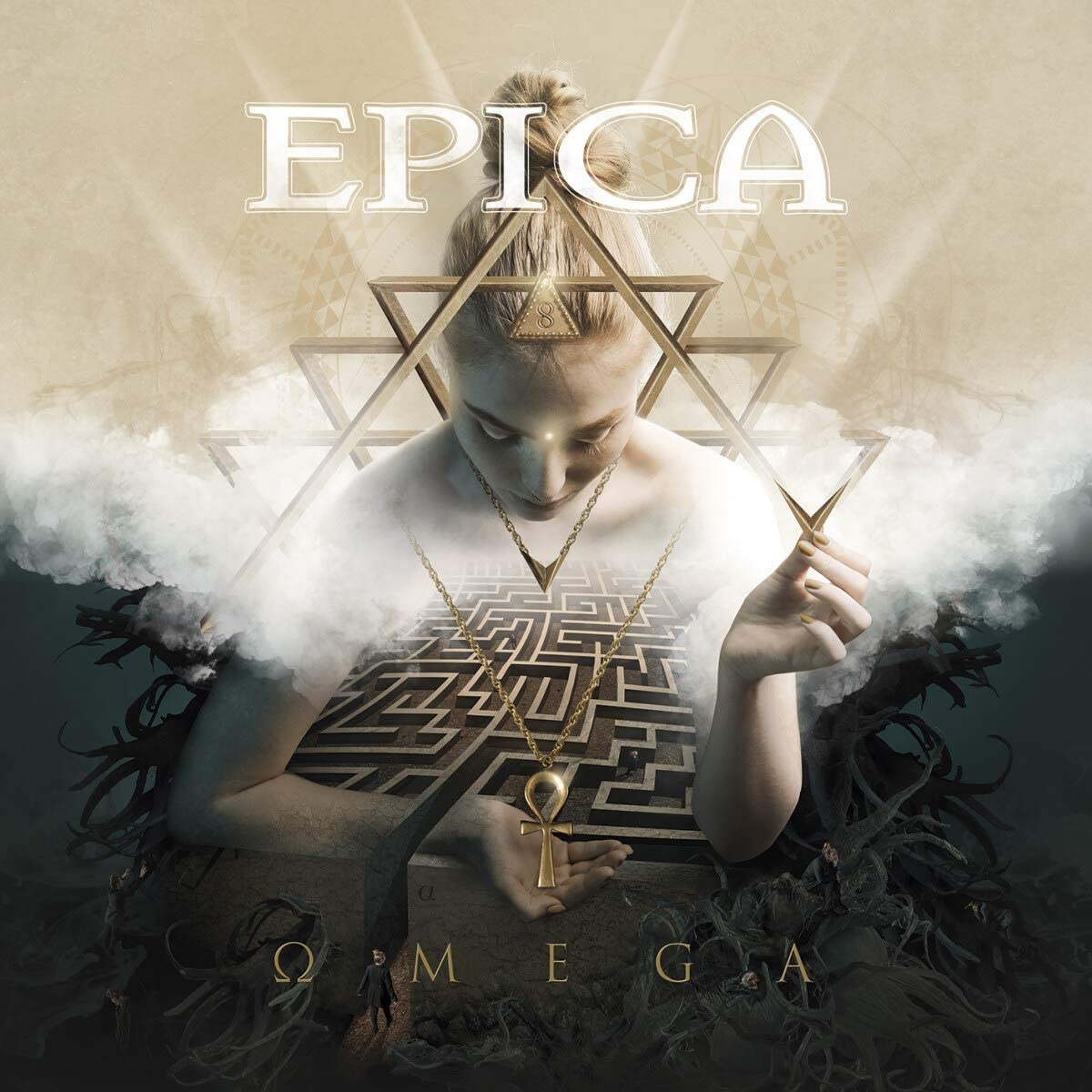 Review:CD-reviews buiten BeNeLux
Ina Martin    28 februari 2021
Epica fans won't be disappointed in Omega. It has all familiar ingredients - Simone's ethereal vocals, Mark's growls, bombastic sound and existential lyrics. The signature symphonic melodies take flavour from oriental influences in Seal of Solomon and Code of Life, reinforcing the idea of the mankind reaching the Omega point and coming together. Listening to their vlogs about the making of Omega, it seems that at least as far as the band is concerned, they reached their personal Omega point in creating this album, gathering to work with each other a lot more closely than before.

The album starts with the ethereal Anteludium (Latin for "overture"), strings and choir blending perfectly to pave the path for Abyss of Time - Countdown to Singularity, a signature song and as such aptly chosen as the first single. Heavy drum background, the contrast between Simone's vocals and Mark's growling, and the choir all set the atmosphere for the album's journey to singularity. Personally, it reminds me of Kamelot's A Sailorman's Hymn, even though it's a lot heavier. There's something about the melody however, which takes my mind to that song.
The Skeleton Key is one of my favourites from the album. It has everything I love in a song - a strong melody and hooks, and a big choir. The message of the song is that the answer to healing ourselves is inside us, if we find the strength to look for the light and fight the darkness in our souls.
Seal of Solomon is another favourite. I find that oriental melodies work very well with metal, and here they make for great hooks, running throughout the song. Once again you have a big choir, and a killer guitar solo. The lyrics are probably the most mystical in the album, referring to the seal/ring King Solomon used to control supernatural entities. To be honest, to me it feels like that topic doesn't quite match with the overall theme of the album, as the rest of the lyrics focus on more psychological themes like rediscovering yourself and accepting all of who you are in order to unite with the universe, but it's still a fantastic song and maybe in time I'll see more clearly the link between its lyrics and the rest of Omega.
While Gaia is still a very strong song, it doesn't stand out for me as much as the previous two. It's purely a personal impression, as it has everything you might want from a big symphonic song - heavy drums and guitars, a choir, the cusomary contrast between Simone's vocals and Mark's growling. It simply didn't strike a deep chord with me.
Code of Life returns to the oriental hooks. What stands out for me the most, however, are the lyrics. "We are the victims of our destination," makes me think of modern life, where everyone is always running towards their goals, but in doing so we often forget to enjoy the journey itself and to notice the small but precious moments of simple happiness. However, the actual meaning is more related to the inability to stop progress. The question is, "Can we defy the code of life?" as we try to reach divinity. The answer still seems to be unclear.
Freedom - The Wolves Within is the second single, and considering that I've been humming "Our freedom, all we ever need is freedom" for the last few hours, I can see why. It's definitely got the catchiest and most memorable refrain out of all songs on the album. It makes me wonder how long it took for the band members to get it out of their heads. Lyrics-wise, it's about choosing our path in order to heal ourselves. Light or gloom, the choice is ours and "The choices we make will define our own fate so we can rise to greater heights."
Kingdom of Heaven - Part III continues the theme of healing in an epic 13-minute track, which flows like waves, building to a crescendo, then slowing down for a breath of air, only to build again to another climax. According to the song the answer we are searching for is the cosmic/divine energy and in time we will learn to use it to heal ourselves.
Rivers focuses on the moment of drowning, of slowly sinking into despair only to find the strength to return to the surface in a surge of self-reaffirmation. It starts off slowly with a gentle piano, haunting vocals and a heartbeat-like rhythm and builds up to a climax, the children's choir both unsettling and beautiful as the lyrics "Break loose from the chains / Rise above the waves / Fighting in the darkness / Dancing in the light / Break out of your cage / Turn another page / Drowning in the river / Swim against the tide of life" rise to a crescendo.
Synergize - Manic Manifest deals with that self-reafirmation and reinvention, and the start of a new beginning. "Realize it's time to change your point of view and rise / Your time has come / synergize now," it declares in a track full of energy and headbang-worthy drums. The end slows down to introduce Twilight Reverie - the Hypnagogic State. The title refers to the state between wakefulness and sleep, when you experience a "natural fragmentation of consciousness" (Valdas Noreika). It seems to imply that in order to reach the Omega point the mind needs to undergo a transformation through fragmentation, and reach a new state of consciousness. Musically, the song alternates between a slow and a relatively fast-paced rhythm in waves similar to Kingdom of Heaven - Part III.
Omega - Sovereign of the Sun Spheres starts with the grand sound of a horn fanfare and a choir and develops into a fast-paced track which blends orchestral arrangements and the traditional drums and guitars, closing the album with a bang. The key to unity after the fragmentation of the mind is the acceptance that "we are dancing in duality" and the knowledge that "we will last forever as our essence never dies."