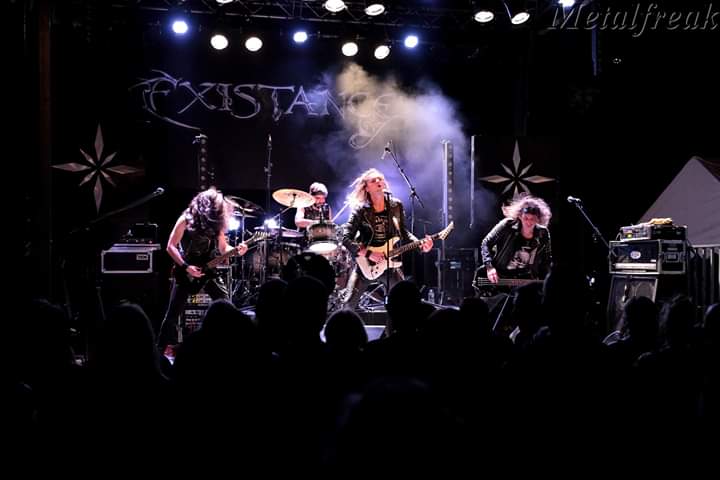 Existance plays at Kraken Metal Rock Fest 7 and introduces themselves to us!

They are a metal band from France and will headline the Kraken Metal Rock Fest 7. In case they need an introduction, well here we go!

First one: why this band’s name? What’s the story behind it?

Julian : When I was younger I already known the name of the band. I didn't know why "Existance" at the time but when things became more serious and my vision grew up with me I found the answer. I like the way back in 2008 that we were playing old school heavy metal from the 80's while nobody was born during this decade (laughs). It is a philosophical way to give importance to our music, we exist and Heavy Metal does still exist and we are here to show the world we are right !

Created in 2008, so you had a long path and could grow and become better, harder and stronger? How do you folks look back at it?

It is awesome. I mean...it is a big part of our lives. We grew up, we learned a lot, and still learning by the way. We had the opportunity to play in many countries, we met a lot of artists on the road, and some that influenced us a lot. What a chance. We love every parts of the creation, from the rehearsal rooms to studios to stages...we couldn't be more grateful towards people who support us too. It is a great feeling. It is what music is all about.

Who influenced you or made you create this band?

When I was 8 years old i'd rather watched Iron Maiden's Live After Death or Thin Lizzy's Alive and Dangerous than playing outside with my mates. I was like "oh my god, I wanna do this!"...This was my first steps into the "metal world". (laughs) Later, we were inspired by a bunch of artists from the 70's to 90's but more importantly from the 80's I have to say. There is so many influences for each member in Existance that we can't name every band !

When I listen to your music I make the remark that it sounds like a professional mix between Iron Maiden and Manowar. Is that fitting the description or how do you see it?

I do appreciate what you say thank you ! It is hard to say...we all feel things differently concerning music actually but I'm glad you compare us with these bands. For example, we all love Judas Priest but not necessarily the same albums or songs so...it is not so easy to say!

You are from France, a huge country and yet you also toured in a lot of other countries, can you tell us some fun facts about it?

During the tour we made in 2018 with Primal Fear we were driving by night from Italia to France. Unfortunately we had to sleep on the motorway rest area at the border because we had a problem at the toll station. We were really tired and we put our credit card in the wrong place...no way to retrieve it. Not so funny at the moment. We had to wait until next morning because employees didn't have the key to open the machine...and it was an aweful night ! When we finally get the card back we were laughing out of our asses....what an hilarious moment. We could speak about it for hours ! (laughs)

How did you end up signing with a Japanese record company?

We contacted the boss of Spiritual Beast, Akira, and he was interested by working with us. We are talking about a new deal for the upcoming album this year. Wait and see !

Love seems to be the red line in most of your songs? What are the other subjects?

We talk about true stories, wars, things it is worth to fight for, things that happened to us, which is always truly inspirational. Fate, anger, love...many things actually. We are not thinking for hours about this or that subjects. Eveything comes naturally. Love is one of them for sure!

Sinner of Love is a magic power metal track, what inspired you to it?

We needed a slower/mid tempo song on the album and Antoine came up with the whole idea. We rearranged some parts together, as we usually do. I like to sing it, there are different varations full of passion and power in that song. It was the perfect love anthem for the album.

Marylin (Icon of Desire) is something different: more speeded up and yet also devoted to love. What’s the background story of this song?

It is the love story Marylin Monroe had with a rich and influant man before she died. I watched a documentary once and I remember I was shocked to learn how she was alone and sad. I wanted to pay a tribute to her with this song.

With whom would you love to play together if you only had to make a phone call or send out a mail and why?

I think Saxon would be crazy. We would like to play with all our favorite band for sure.

The 9th of may you will perform during the Kraken Metal Rock Fest 7, what can we expect?

A fuckin' great heavy metal show man ! It is been a long time we haven't play in Belgium so we are ready !

Is there something you want to say or is there a question I should have asked?

We will be back this year with a new album ! You can follow us on Facebook and Instagram @existanceband to be updated about our a current events. Also thank you for this interview and for all metalheads and metal maniacs : keep supporting bands you love, listen to music anytime, everywhere and Heavy Metal will never die. See you at Kraken Metal Fest !